You are here: Home › NATO And Russia Conduct Naval Drill Together For The First Time In A Decade 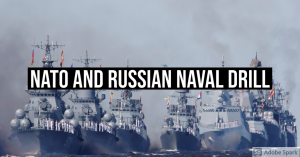 With tensions rising between NATO and Russia, it is a rare thing to see something potentially positive between them, at least in a superficial sense. However, as ThomsonReuters reports, there is at least one positive event taking place as for the first time in a decade, NATO and Russia are going to take part in a naval drill together.

The Russian navy said on Thursday it would take part in drills involving more than 30 countries off the coast of Pakistan, the first time in a decade that its vessels have taken part in exercises alongside NATO ships.

The AMAN-2021 anti-piracy drills are set to be held in waters near Karachi in February 2021 and will involve British, U.S., Turkish, Chinese, Japanese and other forces, the Russian defence ministry said in a statement.

Russia plans to send a frigate, a patrol ship, a tugboat, a sea-based helicopter and some other units, it said on its website.

Russian and NATO navy vessels last took part in drills together at the NATO-led Bold Monarch exercises in 2011 off the coast of Spain, it was quoted by the TASS news agency as saying. (source)

As far as trends, this still does not change the current situation of a growing war between the great power blocs. That said, it will be interesting to see what may come- either from this or another event -with as it pertains to Germany and Russia. NATO may be an American project, but Germany is the heart of Europe, and a Russo-German alliance or at least, non-aggression pact (think Molotov-Ribbentrop) is a precursor to any sort of greater action being taken that may isolate the US and put Europe back on the path to war, which historically speaking, she has already returned to walking down again.

It is interesting to note that Russia is trying to build up her navy, for as powerful as she is, her navy is very weak here, and her main naval ambitions are coming due to attempts to build an all-sea passage through the Arctic to Asia in an attempt to circumvent the current railway projects that are cutting Russia out of railway access, for while she has lines that stretch from Moscow to Vladivostok, they are old, in poor condition, and on different standards than those in the rest of the world so much that they are practically unusable save for being in Russia herself.

Either way, given these developments and trends, Russia’s attempts to build up her navy and the continuing struggle for sea power between the great world governments will be something to watch.