You are here: Home › Will The Radio Signals Go Dark? 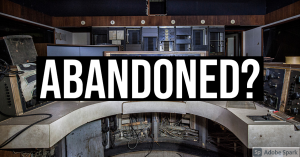 Ever since Marconi made his famous radio broadcast in 1920, radio has been a virtual staple of communication, for while by comparison it is a very simple technology, it is one of the most reliable forms of electronic technology that can connect people, especially in isolated areas. However, the Washington Post reports that some signals may ‘go dark’ as the government is considering putting certain channels for weather use out of commission permanently.

For the past decade, the National Weather Service has been plagued by failures in disseminating critical forecast and warning information that is aimed at protecting lives and saving property. In some cases, its websites have gone down during severe weather events, unable to handle the demand.

Now, during a year that featured record California wildfires and the busiest Atlantic hurricane season on record, the Weather Service says it has an Internet bandwidth and is seeking to throttle back the amount of data its most demanding users can access. The Weather Service, which is part of the National Oceanic and Atmospheric Administration (NOAA), announced the proposed limits in a memo dated Nov. 18.

“As demand for data continues to grow across NCEP websites, we are proposing to put new limits into place to safeguard our web services,” the memo stated, referring to the Weather Service’s National Centers for Environmental Prediction. “The frequency of how often these websites are accessed by the public has created limitations and infrastructure constraints.”

“[W]e want to exceed the needs of our stakeholders and partners,” said Susan Buchanan, a spokeswoman for the Weather Service. “[H]owever, we are challenged with bandwidth limitations as models and observations improve and data size increases.”

“User requests for data continue to increase and without imposing some type of mitigation,” she continued, “the bandwidth situation will worsen, potentially impacting a larger number of users.”

According to companies that draw large amounts of this data, the proposed limit will substantially harm the services they provide to customers. The possible negative effect on forecasts has also raised concerns among congressional lawmakers.

Jonathan Porter, a vice president and general manager at the private forecasting firm AccuWeather, warns that the agency’s proposed solution would harm the timeliness and accuracy of forecasts and severe weather warnings. He said the collection, processing and distribution of weather information are the agency’s “most important services.”

“Limiting the amount of data that can be accessed conflicts with this vital mission and will negatively, and possibly catastrophically, impact individuals and businesses that rely on this data to make critical, lifesaving decisions when seconds count and lives are on the line,” Porter wrote in a statement.

Ordinary weather consumers who get their information primarily from weather apps on their phones also would be affected by this proposal because the forecasts and weather alerts they receive are based on computer modeling output and radar data, much of which comes from the Weather Service.

“For private industry, it’s a huge impact, especially for users that are adjusting a lot of National Weather Service models,” said Matt Rydzik, applications developer for Commodity Weather Group, which serves clients in the agricultural and energy market.

The Commodity Weather Group operates the website StormVistaWxModels.com, a hub of computer model and forecast data that customers rely on to make what are in many cases financially costly decisions. Weather hobbyists also pay to access the site’s rapidly updated modeling data for predicting weather.

The StormVista site draws in data from more than a dozen models, including the American GFS and European model, and Rydzik said simply pulling data from one of them would potentially exceed the Weather Service’s data limit. He called the impact of the Weather Service proposal potentially “devastating” because it would force his company to reduce services.

“I’m assuming it would be impossible to bring in half the model runs,” Rydzik said. “It’s like a store rationing a family to one loaf of bread per week.” (source)

This is a huge trend to watch.

Radio access is critical for many people around the world. The weather service is one of the most reliable means of maintaining the current radio equipment. If this is taken away, it does not mean the end of ‘weather reports’, but save for Ham Radio operations, it could mean largely the end of a lot of radio access, and possibly restrictions placed on ham operations, which have been discussed before by the FCC.

What we are looking at here is setting up a means to isolate people and as a result, cut them off from key interaction with other men that will likely force them into closer proximity with civilization. I am not saying that people need to just “disappear” in the woods, or talk about some nonsense related to this, but to say that cutting off the radio access has a more isolating effect than going into the woods by oneself.

Costs are cited as an issue, but they are minute compared to the many other costs the government spends money on. This is not an issue about money, which while it is used as an excuse, it is really about power and trying to ‘pull’ people from remote areas by leaving them essentially vulnerable and in the wild.

This is not just an issue in the US. It has been discussed around the world, and the same concern remains. Norway shut down her FM bands for government broadcasts in 2017, and the Federal Government herself has considered shutting down the Ham radio waves.

If radio goes away, an important communication link goes, and a trend such as this cannot do anything but only have negative effects.