You are here: Home › A Cautionary Tale From New York 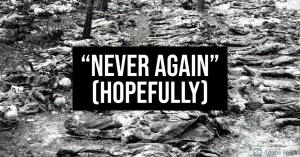 I just got off from a conversation with an old friend who reached out to me about a situation with a Syrian Moslem refugee family living in the Bronx in their apartment building.

I’m going to leave out a lot of details, but hopefully will not detract from the message of it. To give context, this is a practicing and serious Catholic couple in their late 30s living in an apartment in an economically lower but certainly not the lowest area of a neighborhood in the Bronx. In their building, a few months ago, a couple moved in in their early 30s. They are a man, his wife, and their newborn baby, all from Syria as refugees from the violence.

According to this friend, the wife was attacked while carrying the baby by a crazed neighbor who was screaming anti-Muslim statements at them. The husband came, but it was such a situation that even he had trouble getting the other person off and away. My friends had to help pry and get the other family to safety, as well as call the police.

The Syrian family refused to press charges. However, owing to the fact that they are refugees, that no one has talked to them at all in the building, how save for an occasional visit to the mosque they are all alone, and this incident, the only people they will interact with are my friends, and she said they genuinely seem scared of most people and try to stay away from others.

They reached out to me for questions about Islam and Syria and how to best interact with these people. I gave them my perspective, but that is not the point of the story.

The point of what I am saying goes back years ago to the warnings that Ted, Walid, and I started making at Shoebat.com about the rise of nationalism, racialism, and Islam. None of us have ever changed our views on Islam save to only deepen those positions we already had. This is not new at all.

What has changed, however, is how we address the same matters, adjusted for the times and because of the extreme dangers we saw developing.

Walid did not become a Christian because he wanted to wave the flag and sing the Star Spangled Banner. He has done both (support religion and country), but the two are not interdependent. Likewise, his faith is not contingent on the latter. Ted is the same way. He did not oppose a host of moral evils to support PNAC or cheer to the words of “Mission Accomplished”, nor does he equivocate Christianity with nationalism. Likewise, the source from which I gather my learning and faith by reading Sacred Scripture and Tradition is separate from my desires of the good will for American society or any understanding of national politics.

Yet this is what happened, not by us, but what we found ourselves thrust into. The people did not care about Islam. They will cheer for Islam if it means being “anti-China” just as much as they cheered for Putin when it meant being “anti-Obama”, but rather an excuse in the moment for a particular problem without any philosophical or moral regard for said position in its totality.

This is the grave danger, for many people, even well-meaning people who want to do what is good, find themselves drawn by standing against one moral evil to set up the conditions for another.

This is why so much less about Islam has been spoken by us, not to lose the potency of any argument, but rather to emphasize balance where it is not found and from which said unbalance is being used to justify further imbalances.

This story that happened in the Bronx is not new, and it surely has happened many times, and it is a warning sign to people of good will. There are people in this world, in this country, who do not care about the good will of others, and who will use one evil to justify their own evils. What good is being anti-Islam if it means being ‘pro-genocide’? It is not a moral improvement, but a substitution of evils that generates the same result, no different that substituting “2 + 2” for “5 – 1” or “8 / 2”.

One may recall how Shoebat.com has written about the ‘alt-right’ movement and how the ‘alt-right’, while the ‘movement’ itself is dead, is but one vector for the larger trend of nationalism, has spoken about the mass murder of Middle Eastern and African refugees in Europe. This is not to justify the behavior of too many of such migrants, that tends to the violent and unreasonable, but rather to the fact that the migrants are being used as pawns in a game of geopolitics, and that both the good and the bad alike will perish in the name of an evil idea just as what happened in Europe last century.

I am not saying this directly will happen in the US at the current time. However, the fact is that certain trends are real and must not be overlooked, and that the lives of real people are affected.

If the purpose of life is to know, love, and serve God, what is one going to say in answering situations such as these? Does it matter whose party won in an election, or how one treated his fellow man and what good one did or did not do for him when he needed it most?

The meaning of life is the pursuit of the law of God, Who is Love, and of which has perfect mercy and perfect justice perfectly residing in Him. While Islam is an evil religion, the Moslems are people, and it is the moral thing to help them seek the path to Heaven as one should want to seek for oneself, and this is a path much bigger, more serious, and more wondrous than any sort of politics or tribalism could ever conceive of, and most importantly, many times, the steps on that path are assisted or hindered by our actions.