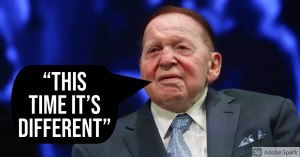 Texas has been going through a lot of changes recently, especially due to the migrant invasion from California- of almost entirely American-born non-Hispanic persons of extreme political persuasions – that as a rat jumping over a shipside having gnawed a hole into the hull and it is now sinking, are scurrying away into Texas. The Texas Tribune now reports that casino billionaire Sheldon Adelson wants to lobby for changes that will let him build a casino.

The casino empire helmed by GOP megadonor Sheldon Adelson is zeroing in on Texas.

Las Vegas Sands, among the world’s largest gaming companies, has set its sights on legalizing casinos in the state with a stable of high-powered lobbyists for the upcoming legislative session — and on Tuesday, a public acknowledgment of its ambitions.

Andy Abboud, Las Vegas Sands’ top lobbyist, said the company was pursuing Texas as one of only a few expansion opportunities, along with places like Japan, Brazil and New York.

“We view Texas as a worldwide destination and one of the top potential markets in the entire world,” Abboud said during a conference hosted by the Texas Taxpayers and Research Association. “Texas is considered the biggest plum still waiting to be out there in the history of hospitality and gaming.”

The Texas Tribune thanks its sponsors. Become one.

For over a half hour Tuesday, Abboud made a robust pitch for legalizing casino gambling in Texas, putting a clarifying exclamation point on recent speculation that Las Vegas Sands was targeting the state. He proposed a “limited number of destination resorts in Texas,” in or near big cities, that would not aim to replicate Las Vegas but would “blend into existing infrastructure.” He said a “strict regulatory environment” would be an “absolute requirement.” And he urged lawmakers to require bidders to make a “minimum investment of 1 or 2 or 3 billion dollars so that you absolutely only get the best companies bidding and they are forced by law to build an incredible facility.”

Las Vegas Sands’ interest in Texas is coming to light after a November election in which Adelson and his wife, Miriam Adelson, ranked among the top donors to Republicans’ successful battle to preserve their majority in the state House. The couple donated $4.5 million in September to a Texas account affiliated with the Republican State Leadership Committee, the top national GOP group involved in state legislative races.

Previous efforts to legalize casino gambling in Texas have not taken off, though the appetite could be different this session, when lawmakers are faced with a $4.6 billion budget shortfall. That has generated speculation about new revenue sources, including “sin taxes” such as legalizing casino gambling and marijuana.

“They are job creators, they hire a lot of additional employees, they have tremendous purchasing power,” Abboud said of casinos. “But they are also tremendous generators of tax revenue.” (source)

All I can say to this is: Goodbye, Texas. At least, from what she used to be.

It is bad enough to see the migrant invasion into Texas- the American-born non-Hispanic one I should clearly note -because they are driving most of the change. As the recent election results show, it is not one’s “everyday Jose” who is causing trouble, and in fact it is he who now given that he is voting for the political right in record numbers may actually upend the historic Democrat lock on the Hispanic bloc and help the Republican party shape their message and stance back to the classical position of her being a party for the working man and the Democrats as the party of the ‘elite’ and disconnected. It is the political left, overwhelming dominated by non-hispanic whites and Jews, who is driving the push to the far left by pouring into Texas cities and they trying to remake the city in the same mould of that which they fled from but without regard to how the problems that happened in the places they fled from started.

A casino in Texas, while in theory a “money maker”, would be a final “nail in the coffin” for Texas because casinos are inseparable from crime. This is not to say that all casinos are evil, or people who go to casinos are evil, but that the casino industry in the US has always been directly tied to criminal activities. The famous casinos of Las Vegas, for example, was primarily built and controlled by Jewish criminal interests and their associates such as Morris Dalitz, Gus Greenbaum, “Dandy Phil” Kastel, Meyer Lansky, Morris Rosen, Harry Rothberg, and Benjamin “Bugsy” Siegel. Likewise, one must never overlook the directly overlapping influence of the Sicilian “cosa nostra” families such as the Genoveses, Gambinos, Bonnanos, and other families that began under Salvatore “Lucky” Luciano following has assassination of Salvatore Maranzano as a part of the 1931 Castellammarese War in New York. It was the unholy union of “cosa nostra” and “kosher nostra” that created the casino industry and, to a large extent remains today as owners or involved in them.

This brief history lesson serves as a lesson for today, that regardless of who the ethnicity of a person is- as such is never the matter in question -that the reality of crime and casinos in the US cannot be separated. Above is just the open violence and corruption. This does not speak of the fact the same casinos directly encourage and attract prostitution, drug abuse, alcoholism, money laundering, and ever shade of crime between blue and white.

Adelson is jumping ship because he knows the future. He is most likely going to Texas not because he cares about the people, for while I do not know the man, his personal feelings, or would dare to assume such, it is highly unlikely he is there for charitable reasons save his own. He sees a fresh market, as do all of those involved in the business, they want to exploit, after having exploited, dried up, and left for dead California and possibly Nevada. Indeed, such behavior is more akin to that of a vampire sucking its victims blood for its gain and leaving the remains behind.

But what is Texas to do? With the California domestic migrants bleeding her dry, stressing state functions, and causing social changes- as all changes come from people and not by accident -she may turn to the casino as a possible “economic lifeline” to “create jobs”. It is good for a man to have a job, but such jobs should build up society, not tear it down in the name of profit through obtuse exploitation that eventually leads to collapse and destruction for many.

It will be interesting to see where this goes, but so far as the state of Texas is concerned, the trends do not look good for her, and she just may be on her way to becoming the very state- California -that she has so criticized.