You are here: Home › Will Trump’s Lawyers Get Sued? 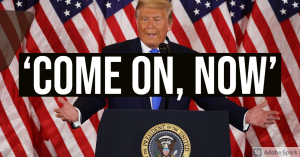 With the dust settling over the election 2020 debacle, the Washington Post asks an interesting and critical question- will lawyers for Trump who filed lawsuits on his behalf now find themselves in a legal crosshair over ‘frivolous lawsuit’ accusations?

President Trump’s legal team is entering into what might be its most desperate election challenge yet — and given its overwhelmingly failed past efforts, that’s saying something. Its move to join in the attempts by Texas Attorney General Ken Paxton (R) to have the Supreme Court overturn the results in four key states has been ridiculed even by some top Republicans.

Texas’s own senior GOP senator, John Cornyn, said, “I frankly struggle to understand the legal theory” behind it. Jeb Bush responded by saying there was no theory and predicted that the court would reject it out of hand. Sen. Ben Sasse (R-Neb.) even went so far Thursday as to suggest it was a “PR stunt rather than a lawsuit” and that Paxton might be merely seeking a Trump pardon for his personal legal problems.

The thing is, though, our legal system has mechanisms to combat frivolous lawsuits. Broadly speaking, there is supposed to be a price to pay for flooding the zone with the kind of dubious claims and alleged “PR stunts” that have characterized the Trump team’s legal strategy.

But will the lawyers involved face such penalties? Legal ethics experts are skeptical, even as they suggest they might be warranted.

The federal law at issue is Federal Rule of Civil Procedure 11. Known as Rule 11, it requires that those making cases in court must not be doing so “for any improper purpose, such as to harass, cause unnecessary delay, or needlessly increase the cost of litigation.” It also requires that “the claims, defenses, and other legal contentions are warranted by existing law or by a nonfrivolous argument.”

The American Bar Association also prohibits bringing or defending a lawsuit “unless there is a basis in law and fact for doing so.”

A lawsuit based on bogus claims that is brought for partisan political purposes or to curry favor with a president, as Sasse suggested this is, would certainly risk violating such rules. In addition, a judge punishing a lawyer for such frivolous claims, if viewing such claims as proliferating, could send a message to other lawyers considering similar lawsuits — which is the explicit purpose of Rule 11.

Harvard University law professor Mark Tushnet argues that there are violations of Rule 11 in the Texas lawsuit and others filed on behalf of Trump, given that several of them have included false allegations, affidavits from witnesses whose claims judges said didn’t stand up and inaccurate descriptions of those affidavits. (source)

Now it is yet to be seen what will happen in this situation. There are many possibilities for what could happen.

However, what we can say is that for all of Trump’s talk about “Lock her up” from 2016, it is more of a possible reality for him now in 2020 than four years ago.

Life changes, and sometimes very fast. Right now, things are accelerating in the US politically speaking. The trends all point to extreme politicization, political violence, and successors potentially taking out their political differences with the previous persons in power on them.

In other words, the US is looking more like the old world than the “new world”. There is also little that can be done because the trends are not recent, but long-forming and rooted in serious political differences that are fundamentally unresolvable.

It is yet to be seen if Trump’s lawyers are sued, but given how Trump has already debased political discourse, it would not be extraordinary if Biden continued that trend. However, if he does, then just as Ted, Walid, and I have warned, whoever is the political successor of an opposing party will likely find himself in a similar position in the future.

For years, people warned that the USA could become the USSA. This goes back to the 1950s with Ven. Fulton J. Sheen’s numerous broadcasts. Unfortunately, it seems this warning is long past, as events have transpired where we are already past that point, and it is just coming into the fullness of the conclusions and ideas that have already been accepted as normal with the inherent consequences. In short, the twentieth century is back, but with new weapons to realize the same ends faster, more efficiently, and most importantly, in a more complete manner than ever before.

Christian Family In North Carolina Puts Up Cross On Their Yard To Celebrate Christmas. Home Owners Association Tells Christian Family: ‘Take Your Cross Down Or Else Pay A Fine.’
Stocks Go Up To Record Highs As 93% Of Global Economies Tank
Follow