You are here: Home › Stocks Go Up To Record Highs As 93% Of Global Economies Tank 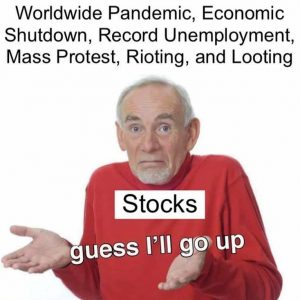 COVID did not destroy the world economies, but just exposed what was already there, and with each passing day and the more information that comes out, the more difficult things seem to be. According to the European Central Bank and reported on by Zero Hedge, new market research shows that 93% of economies around the world are suffering major economic contractions while the stock markets are at all-time highs.

Although the euro spiked and markets appeared initially disappointed by the ECB’s measures, by the end of the day “longer-end rates had rallied and IG credit spreads were broadly unchanged” Martin writes and adds that “what’s clear is that financial repression lives on for another year…a bullish backdrop, which will continue to elicit a thirst for yield across debt markets, in our view.”

Just in case it’s not that “clear”, the BofA strategist explains that the message from the ECB is that “the key message underlying everything was that favourable financing conditions must be preserved across all markets: banks, sovereigns and corporates.” And as he further notes, what the ECB did “should be thought of as akin to Yield Curve Control for credit.” Which also means that if corporate yields are under lock and key for 2021, “then credit vol likely will sink further next year, continuing to support the thirst for yield and compression trade in credit.”

That said, while anyone who has dared step in front of hits liquidity firehose, which as we noted on Friday amounts to $1.3 billion in asset purchases every hour, has been absolutely crushed, there is a distinct risk as we head in 2021.

First some context: as Martin puts it, “it’s hard to escape how powerful the policy “supernova” has been this year, against a backdrop of historically horrendous growth.” And just to put it perspective, his next is absolutely staggering: “2020 is ending with 93% of economies across the world having contracted (Chart 1), with 53% shrinking this year by more than 6% (versus just 17% of economies in 2009).” (source)

Unfortunately, this right here is the beginning sign of a major trend I warned about, which is the trouble in the financial system.

I have explained this in many posts, which you can read in the Shoebat archives, but I will summarize the concept here.

Right now, the world economic machine is drowning in debt. The situation of the common man to the most powerful governments is the same. All are drowning in unpayable debts that have built up for decades following the Second World War, and with the US dollar itself in debt (since the dollar is a note of debt backed buy the credit of the United States Government), there is no way out of the current mess save for either a disowning of the debt that would lead to price deflation and massive depressions for the whole world, or paying it through hyperinflation an in the process crashing the currency, destroying savings, an causing long-term political instability that probably would lead to a war. In both cases, the latter is historically chosen not because it is the better option for all, but because it is the more politically expedient one, since it allows the debt to be separated and in a sense ‘scapegoated’ onto itself with no individual taking responsibility.

But why then are stocks going up? Should they not be going down?

Now some stocks will tank because of how these companies are exposed to the debt. Big real estate companies, for example, are in a lot of danger because of the commercial housing debt-bond market link. However, companies themselves on average will neither increase nor decrease in value, but rather, their paper value will rise in accordance with the debasement of the currency to preserve their measure of real value without adding to it or subtracting from it.

I will say this again:

…companies themselves on average will neither increase nor decrease in value, but rather, their paper value will rise in accordance with the debasement of the currency to preserve their measure of real value without adding to it or subtracting from it.

Let’s use the example of a cup of coffee. One may see that, from five years to now, and five years before that (ten years ago), on average, the price of a cup of coffee is more expensive. For example, $2 ten years ago, to $2.25 five years ago, to $2.50 now. The amount of coffee has not changed, nor have any of the other production variables (coffee bean prices, scarcity, paper costs, etc.). Likewise- and very important here -the rate of consumption is the same, and may even be slightly less than in previous years.

The question is, did the value of a cup of coffee increase (natural price inflation, a sign of increasing consumption) in value itself, or not?

The reality is that cup of coffee has the same value as before. Likewise, there are no outside, odd variables to show abnormal consumption rates, which would be inflation due to above average interest. Rather, it is that your money is worth less than it was worth before, meaning you cannot buy what you used to in the same amount for the same price, but have to pay more for less.

Have you noticed how in the US there have been slight price increases with generally smaller product sizes? This is not an accident. This is because of not inflation in the true sense, but rather, “inflation” as a form of currency debasement. You are working more and getting less.

This explains why the stock market is increasing at a time of economic turmoil. It is because the value of the companies themselves are mostly the same as they were before. The only reason their “value” seems to be “increasing” is because the “increase” is really a rise in price to preserve the value of the company as before but adjusted to the debasement of the currency. It’s no different than the price of a cup of coffee increasing- not because the cup is worth more, but because your money is worth less and on the way, if not stopped, to becoming potentially worthless.

This is why the stock market is but also is not a reliable indicator of serious problems, because it reflects a preservation of value that is easily mistaken for an increase in value.

With 2021 coming up, I genuinely hope that I am wrong about the future. I would rather be wrong than right because from what I am seeing, the economic problems exposed by the COVID crisis are not going away no matter when COVID is finally gone. It is a snowball falling down a hill that is not going to stop and may get bigger, having the potential to cause serious currency problems with the US dollar to such a point that the economic issues will expand into the political and thus accelerate the current trends of nationalism and militarism to the end of a major war that will reset the economic paradigm but at the cost of many lives.

Will Trump’s Lawyers Get Sued?
Will 2021 See A Major Famine?
Follow