You are here: Home › Trump Swaps Freedom Of Speech For Chinese-Style Internet Censorship As He Backs The Destruction Of Section 230

By Andrew Bieszad on December 17, 2020 in Featured, General 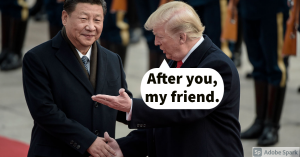 President Trump has declared that he will veto a major spending bill unless a provision abolishing Section 230 of Federal Law is removed.

President Donald Trump said Thursday he will reject the sweeping defense bill that authorizes a topline of $740 billion in spending and outlines Pentagon policy.

“I will Veto the Defense Bill, which will make China very unhappy. They love it,” Trump tweeted. “Must have Section 230 termination, protect our National Monuments and allow for removal of military from far away, and very unappreciative, lands. Thank you!”

The Republican-led Senate overwhelmingly passed the National Defense Authorization Act on Friday. The more than 70 members in support of the must-pass bill is more than the two-thirds majority that would be needed to defeat Trump’s promised veto.

The offices of House Speaker Nancy Pelosi, D-Calif., and Senate Majority Leader Mitch McConnell, R-Ky., did not immediately respond to CNBC’s requests for comment on the president’s tweet.

The bill, which typically passes with strong bipartisan support and veto-proof majorities, authorizes a topline of $740 billion in spending and outlines Pentagon policy. It has been passed for nearly six consecutive decades.

NBC News reported that Trump is expected to affirmatively veto the NDAA, rather than employing a maneuver known as a “pocket veto,” in which he would simply refuse to sign the bill for 10 days. It’s unclear exactly when the president plans to veto the bill.

Trump has offered a variety of reasons for opposing the defense bill. Earlier this month, he threatened a veto if lawmakers did not include a measure to eliminate Section 230 of the Communications Decency Act, which protects tech giants like Facebook and Twitter from being held legally liable for what is posted on their platforms. Trump has repeatedly accused Twitter, his social media platform of choice, of unfairly censoring him. (source)

Section 230 was originally instituted following two lawsuits- Cubby v. CompuServe, and Stratton Oakmont v. Prodigy. Both involved major corporations, the former being a case about defamation, and the latter conflicting with the previous ruling. In the former, it said that online service providers are not responsible for content, while the latter said they are, and considering that these cases involved two of the “big three” (the other being AOL) for Internet traffic in the 1990s, this was a major ruling.

This is why Section 230 was created, essentially as a compromise between the two cases. It allowed for enforcement of law on major issues, but recognized that differences in moderation of content is necessary in order to create a diversity of spaces in which people could communicate freely even if they differed in opinion, and that if companies felt they could be threatened with litigation for their services, they would not provide them or simply would cancel them.

This law is not outdated. To the contrary, it is just as relevant today as it was then, and perhaps more so, given the increasing threats to privacy and the use of “hate speech” amid other questionable claims to justify shutting down Internet traffic that frankly is often because a certain individual or group does not like something.

This protection given to companies, however, is not limited just to them, which is either a common misunderstanding or, possibly, a lie disseminated by its critics. The protections of 230 extend to every website and every user of every website. Unless it can be clearly proven that a website or a personal user is committing a serious felony (disseminating child sexual abuse material, trafficking narcotics or human beings, etc.), as long as that website or host does something to get rid of the offender and can show proof of action, even if it is late, the host  is protected. It is necessary to prevent innocent people and providers from being legally responsible for the unbalanced, dangerous, or evil actions of a minority.

The nonsense about saying that “230 needs reform” from any party, and for any of the criticism thrown at it, only does none of it make any sense, but it is actively dangerous to the concept of freedom of speech itself.

So what if Facebook or Twitter take down “conservative” posts? Boo hoo. The same can be said about liberals if their posts are taken down for the same reason. Cry me a river, both of you, because if that is how you feel, sail away to another forum. You show your dedication with your actions, not with slavish adherence to one platform, and who cares if they are the biggest platforms? Political tides change, so do people’s opinions, and companies depend on your patronage to survive. If you actually care, take your business elsewhere, or find alternative platforms. You don’t like these companies? Try Gab, Parler, start a Discord channel, pick a different forum to access (there are many online forums), use VK, or use any other number of choices. Is it harder? You bet it is! But life isn’t easy, and if so-called ‘conservatives’ were half as good at networking as the political left (from my experience, the left objectively is far superior to the right in people networking together and connecting in-person or by alternative means than the right, which prefers to “shout from mountaintops” but wants another man to go into the valley on his behalf while he does nothing), they would not have this problem.

But instead, we now have “conservatives”, the so-called self proclaimed “defenders” of the “American way of life” promoting the destruction of the very law that allows them to have a voice online and not be sued or censored into oblivion. The logic behind this opposition among the public to Section 230 is about as wise as living next to a man with an angry pitbull in his yard that, while he put up a fence to keep his dog in, the other neighbor files a formal complaint with the town to try and force the man with the pitbull to pull his fence down because “it’s damaging my property values”, while the man with the fence says “if you do that, my dog may unintentionally attack you”.

Right now, the Internet in the US does not operate like the Chinese social credit system, but it sure is on the road to becoming like that, and if 230 is removed, because the legal threats would return that 230 was put in prevent to obstruct, it is nearly guaranteed that Internet companies would almost immediately begin shutting down websites and users who make any statement potentially that could anger anyone.

It would be the end of freedom of speech, and here, Trump, Mr. “MAGA”, is championing it along with his successor Biden.

THAT is the real face of “#MyPresident” and Biden both. It was obvious that Biden wanted to do this. But Trump? The liar is destroying the very freedom he promised to uphold, and from what it seems in my opinion (as I do not know for sure, but can only wonder), not because of a care about actual speech, but out of pride for being criticized on social media.