You are here: Home › New Satellite Technology Can See Through Walls

By Andrew Bieszad on December 17, 2020 in Featured, General 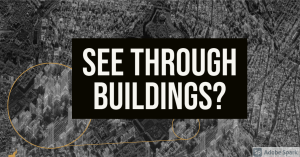 A man’s home may be said to be his castle, but what good is a castle if it is not secure? Hence it is why people put up walls, but what happens if one can ‘see through walls’?

That is the question being asked now by Futurism magazine, as it reports that a new satellite technology lets satellites, literally see through walls in buildings.

Another innovation, he says, is the resolution at which Capella’s satellites can collect imagery. Each pixel in one of the satellite’s images represents a 50-centimeter-by-50-centimeter square, while other SAR satellites on the market can only get down to around five meters. When it comes to actually discerning what you’re looking at from space, that makes a huge difference.

Cityscapes are particularly intriguing. Skyscrapers poke out of the Earth like ghostly, angular mushrooms — and, if you look carefully, you notice that you can see straight through some of them. You won’t be able to on the below image because it’s too compressed, but Banazadeh said that the original image was so detailed you could check out individual rooms.

Right now, that’s as good a resolution as is possible with SAR. Not because of technological limitations — Capella hopes to improve with subsequent satellite launches down the road — but because of U.S. law.

And interestingly, that resolution cap is the only limit that the law places on services like Capella’s. As long as the company don’t improve the resolution a hair beyond what it’s at now, Banazadeh said its satellites can image any part of the world that a paying customer asks for — even technically the inside of a home.

Those customers, he explained, could be government agencies monitoring a hostile military for movement or tracking an airport for activity. That’s where that wall-penetrating vision comes into play. Banazadeh gave the example of an airport where planes hidden under a canopy became clear as day thanks to SAR satellites. The customers may also be scientists peering through the thick clouds of the Amazon rainforest to track deforestation, or even investors checking up on global supply chains.

Possibilities abound. Train two SAR satellites on the same target and they can actually image targets in three dimensions down to minute differences in height. Banazadeh said one group is already using that trick to measure how much oil is being stored in open-top oil tanks or how much is being extracted from an open-pit mine on a given day — and using that information as a proxy for the value of various commodities. That can also help authorities monitor infrastructure for possible safety issues: SAR can track how much the ground above a tunnel sinks over time, for example.

“We’re making it very easy for people with all sorts of backgrounds to interact with a company like us, and that inevitably is going to bring a more users that previously couldn’t access this market,” Banazadeh said. “That’s our hope.” (source)

And of course, there is no way this technology will be used for nefarious purposes…

But sarcasm aside, really, what other purpose for this would there be, and who else would want to use it?

I mention this because of the trends I have noted earlier about the destruction of evidence through deepfake technologies, and now things such as this, the trend towards not just a lack of privacy, but NO privacy appears, sadly, to be the future.

1984 may have been over three decades ago, but it appears was just a little later, for the 2020 are far more interesting than anything ever in that novel, as truth is stranger than fiction.

Trump Swaps Freedom Of Speech For Chinese-Style Internet Censorship As He Backs The Destruction Of Section 230
Does COVID Cause Sterility?
Follow