You are here: Home › Russia Barred From Participating In The Olympics 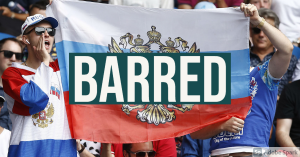 One of the trends that Shoebat.com has followed, alongside the remilitarization of Russia and looking back to her recent Soviet past, is that of the exclusion of Russia from the ‘world community’, likely with the intention of isolating her in preparation for her invasion and potentially destruction, for in spite of all the blustery talk, Russia is probably weaker than she has ever been, wracked by a century of serious problems, almost all of them stemming from the Soviet period, that have greatly enervated her national strength.

Another of such isolating events took place as according to the AP, as Russia has been barred from participating in the Olympics using her national name.

Russia will not be able to use its name, flag and anthem at the next two Olympics or at any world championships for the next two years after a ruling Thursday by the Court of Arbitration for Sport.

The Lausanne-based court halved the four-year ban proposed last year by the World Anti-Doping Agency in a landmark case that accused Russia of state-ordered tampering of a testing laboratory database in Moscow. The ruling also blocked Russia from bidding to host major sporting events for two years.

Russian athletes and teams will still be allowed to compete at next year’s Tokyo Olympics and the 2022 Winter Games in Beijing, as well as world championships including the 2022 World Cup in Qatar, if they are not banned for or suspected of doping.

One win for Russia is the proposed team name at major events. The name “Russia” can be retained on uniforms if the words “Neutral Athlete” or equivalents like “Neutral Team” have equal prominence, the court said. (source)

The Olympics is just sports, but the greater concern is politics, as the “strength” of the athletes is often a measure of political bragging.

That Russia has been ‘barred’ from the Olympics is not about doping. The Chinese do it all the time. It’s a sign that major powers, especially in the Western world, are formally turning on her, and that Russia is being isolated and may be attacked in the future.

Truly, the 2020s are going to be very interesting.

“Religious Leaders” Around The World Stand In Union For Sodomy
Will Computers Become Scarce Over A ‘Global Chip Shortage’ Now?
Follow