You are here: Home › “Religious Leaders” Around The World Stand In Union For Sodomy 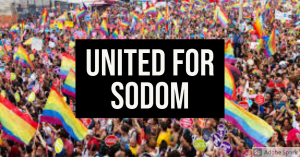 Shoebat.com has for years discussed the major issues concerning the LGBT and its effects and trends on society, which includes many facets but is not limited to religious freedom, personal liberty, and the changing nature of the laws. However, in spite of thousands of years of clear teaching, and opposition from other religions as well, the world has been insistent on abusing itself in modern times on level that arguably have never before been seen on a scale in history.

According to the UK Independent, an interesting moment has come as religious leaders from around the world of many denominations are now standing in support of banning all forms of medical, psychological, or psychiatric treatment to help persons attracted to the same gender to overcome their sentiments.

Almost 400 religious leaders from each of the world’s leading faiths have called for national governments to end laws that discriminate against same sex relationships while also demanding an end to LGBT+ conversion therapies.

Signatories — including anti-apartheid campaigner and former Archbishop of Cape Town, Desmond Tutu, and Bishop of Liverpool — call for “an end to violence and criminalisation against LGBT+ people and for a global ban on conversion therapy”.

“We recognise that certain religious teachings have, throughout the ages, been misused to cause deep pain and offence to those who are lesbian, gay, bisexual, transgender, queer and intersex”, the open letter, which was organised by the Ozanne Foundation charity and signed by figures from 35 nations, adds.

Despite moves towards LGBT+ equality by governments in the 21st century, 69 of the UN’s 193 member states still outlaw gay sex, according to a report published by the International Lesbian, Gay, Bisexual, Trans and Intersex Association (ILGA World) on Tuesday.

Meanwhile the only places to have introduced nation-wide bans on conversion therapy are Brazil, Ecuador, Malta and Germany.

Boris Johnson has previously pledged to abolish the practice, which can include shock treatments and religious components including prayer and ‘exorcism’ style events – with the PM calling it “absolutely abhorrent”.

The statement from faith leaders comes ahead of the Foreign Office sponsored Global Interfaith Commission on LGBT+ Lives. (source)

This is a very significant moment, because this may be, the first time in history, that a bunch of “religious leaders” from around the world in a seemingly serious way stood together to support unnatural behavior and is at its core inherently sterile.

The support of such behavior is, at its core, ultimately one that tends to elevate the desires of man. But the purpose of religion is to honor the desires of God. If this is such, then we can say that religion, while the problem has always existed, one is now seeing a significant shift where globally, religious leaders are saying that their mission is the sanctification of man’s desires, and not the seeking of the transcendent. This is, from a theological and a moral perspective, almost a guarantee for major problems and disaster.

It will be interesting to see how this will affect the Catholic Church in the future. There is already a lot of division in the Church, but not matter what anybody says, Church teaching can never be changed. Remember that seventeen centuries ago, a minimum of three-quarters of the Christian world and almost all of the bishops denied the divinity of Christ, and yet, by a miracle, the heresy of that notorious man Arius was extinguished and the truth Faith restored.

This isn’t the end of the Church. But it is the end of an era, we may be witnessing, and the passing into a new and potentially terrifying paradigm, and no matter what happens, as Christ’s Church was founded on Him, it will not be prevailed over by the gates of hell, even if it means that they temporarily occupy it.