You are here: Home › Americans Waste More Money On ‘Survival’ Equipment Instead Of Thinking About Principle 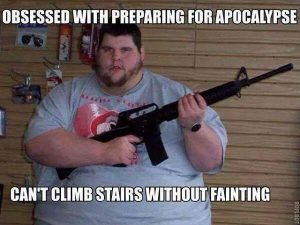 Is the world going to end? Possibly as we know it? A lot of people have this sort of thinking, and with good reason. However, as CNBC reports, some are going to very interesting measures to respond, and as such there has been an increase in sale of ‘survival’ homes.

This was the year that coronavirus fears turned American shoppers into hoarders. There have been widespread shortages on products like toilet paper, hand sanitizer and flour as people prepared for the long stretches of isolation that have become commonplace during the pandemic.

But for one segment of the population, preparing for the worst was a way of life even before the pandemic. “Preppers” or “survivalists,” as they’re known, have been around for years, buying elaborate survival kits, yearlong supplies of nonperishable foods and even elaborate underground bunkers.

“Prepping is about PREparing for emergencies, not creating a supply shortage because you now suddenly need three boxes of N95 masks for your personal use,” a moderator wrote in March on the r/Preppers forum on Reddit, which currently boasts over 208,000 members. Threads focus on everything from Covid and pharmaceutical drug shortages to the benefits of a gas lamps versus candles.

A January survey by personal finance site Finder.com found that 35% of nearly 2,400 people surveyed said they didn’t need to buy supplies in the last year because they were already stocked up.

And the financial new website 24/7WallSt.com estimated in 2013 that there were then 3.7 million preppers in the U.S., comprising a market potentially worth billions of dollars. (source)

There are arguably two ‘survivalist’ mentalities. One is the ‘prepper mindset. The other is the lifestyle one. These are both based on my own observations.

The current and arguably, for many years “survivalist” mentality is equivalent to that of the “prepper” practice. In essence, this involves buying a lot of supplies or goods, doing occasional ‘practices’ in the woods, and trying essentially to ‘buy’ ones way into ‘surviving’ a future collapse or major social problem.

Now I am not discouraging people buying and storing items. Food, for example, should always be stored, because it is a lesson of history that shortages happen, and it helps a man to live. The problem is that one cannot store everything that one needs, or think that one can live a “Mad Max” type lifestyle. Certainly there is room for a degree of this thinking, as it encompasses certain circumstances, but it is not and cannot ever be considered an end into itself.

The latter way is the superior one. This is the ‘lifestyle’ survivalism, which is not really survivalism, but a philosophy rooted in living within one’s means, paying off bills/debt responsibly, balancing one’s needs against what one wants to have in the moment, and learning the skills to replicate conditions favorable to one’s existence.

For example, it is good to catch fish and store them in one’s freezer, or to buy a lot of fish and do this. But does one know how to fish in a pond? What about raise one’s own fish in a pond or even smaller enclosure? Can one do this successfully?

What about say, storing food? One can buy all the cornmeal and ground corn one wants, and this is good. But can one grow enough corn plants to say, store up enough corn to last a winter? But even if one cannot do that (say because one lives in a small yard), can one grow another commodity as a replacement? For example, maybe a short-turnaround low-intensity vegetable ideal for small areas such as Bok Choy, or Daikon radishes?

There are also skills that one can be proficient in that always require a “physical” presence. For example, knowing how to install plumbing lines safely, build with bricks, repair or replace automobile parts, fix small engines, weld metal bars, raise small animals for meat (think chickens, rabbits, or pigeons), are all examples of skills that while they cannot make one ‘survive the elements’ in themselves, are barterable and useful.

I remember one time I was having a conversation with a man who lived on five acres of grass, all that he paid people to take care of, and did nothing with it at all to help feed himself or his family. I have raised chickens for years, and he was unimpressed that I did, saying that chicken and eggs were cheaper to buy at the store. Yes, this is true in the objective sense most of the time, but as I explained to him, and which he did not understand, was that I am not looking to compete with factory farms. Instead, I am looking to help better myself and my family, and that backyard chickens, while a small thing that one cannot ‘survive the end of the world’ on in itself, is a life skill that is useful and a part of truly learning to survive amid troubled circumstances.

This latter mindset is often associated with ‘poor’ people, be it a black man in a tin-roof shack somewhere near the banks of the Mississippi River, or white man in a similar type shed housing setup in the hills of eastern Kentucky, or even a man living in an urban area with a postage-stamp lot in a neighborhood past its prime days. Of course, it is not a ‘poor’ thing, and many middle and upper class areas have people who think this way too, and all of it in a good way.

What I am saying is that people have survived many hardships. One can look at the descendants of the Gulags in Siberia, or the poor, isolated, and often forgotten peoples of much Russia, or the various peoples of the Middle East who live in harsh conditions, or the many ‘pueblitas’ of Central and South America that are equally isolated or forgotten by the world. Men know how to survive and have for thousands of years.

I am not saying that one should not prepare by storing goods, or that one cannot enjoy the fruits of one’s labor, or that one must take any sort of extreme or irrational approach based in whatever sort of thought process. Far from it, for the concept, poor or rich, is always the same, which is that it is not always how much money one has, but how one looks at the world, the sacrifices one is ready to make, and the choice to push through no matter how hard things become.

When I see these ‘survival homes’ being sold, while I am sure it is not everyone that thinks as such, it seems to me that a lot of these people think they can ‘hide from the world’ and wait for chaos to pass in their ‘bunkers’. However, this does not ever happen. Life is not static, but dynamic, and if one thinks that one can just hide away until all things pass- not saying that one has to ‘get involved’ in any particular conflict -then one is setting oneself up for failure, because all it takes is for a part of this ‘safe system’ to fail for any reason and one’s ‘survival bunker’ may become one’s tomb.

This is why the poor and the men who suffer hardship have the best chance of ‘surviving’ in spite of their lack of resources, because they are often already accustomed to the shock of unexpected change, understand what needs to be done to be successful, know what things work and do not work from lived experience, have made very hard sacrifices before, and know on the basis of personal experience their own strengths and limitations and how to work in or around them.

There is going to be a lot of changes happening in the US as the economy gets worse, people become poorer, and desperation increases. That said, if one wants to ‘prepare’ for ‘survival’, it is not about buying fancy houses, lots of military-grade guns, or a years supply of canned beans. Rather, it is about having a small surplus to help through tough times, and learning a real skill that one can use, and build on that.

If you have canned food, can you can yourself? If you like guns, do you have one that can effectively, safely, discreetly kill an animal, and do you have the skills to do it successfully within a budget? If you like meat and have a lot in the freezer, do you also have a generator to keep the freezer going, and to that, have you tried or do you raise a small animal such as chickens, pigeons, or rabbits for meat?

These are simple questions, but they mean a lot, because ultimately, it is not the ‘big things’ that make the most difference, but the ‘little things’ and one’s ability to handle them effectively, fast, and properly under stress.