You are here: Home › It’s Not Just The US- Russians Also Wait In Line For Food Stamps Amid Increasing Poverty And Lost Income 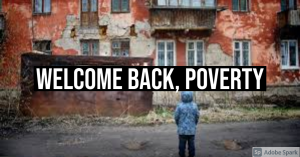 The problems related to the COVID pandemic are not just ‘western’ specific. They rather are a global issue due to the interconnectivity of the global economy and the US dollar as the ‘world reserve’ currency backing the economies of the globe. With instability in the US dollar and the economic problems, of which the majority have been long in the making for decades that are finally showing themselves, a lot of Americans are shocked at the increasing levels of poverty, desperation, and instability, with so many wondering how they will pay for their bills, or from where their next check will come.

However, not to worry, since it is not just the Americans who are affected. In fact, as I have said, it is precisely because the US is the epicenter of the crisis that, like a hurricane, she is also going to be the least generally affected. This is not to say there will not be the potential disenfranchisement of tens of millions of people. Rather, I am saying that because the US is the control point for the currency crisis, she is also in the best position as compared to other nations to weather the crisis. Other nations, as they do not have this level of control, are more susceptible to the effects of currency instability.

Russia is one of those nations, for while she may have a long history and be considered one of the two great competing powers, she is mostly a shell of what she once was. The proof of this is all over her economic data, with possibly the most revealing point being that her national household income is on average just under $6,500 USD per year (compare this with about $68,000 for the US). Thus when the Americans hurt, the Russian are just in miserable pain, and not because any one is better or worse, but because of economic factors and their distribution.

The Russian newspaper Pravda reports on this, noting that due to COVID-related job losses in the already impoverished Russia, people are now lining up for their equivalent of food stamps so they can eat, while the Russian government has even looked at enforced price controls in order to ensure equal distribution of resources and to prevent hoarding.

At the same time, 38% of employees’ income remained at the same level. Only 30% reported an increase in earnings.

On the part of employers, the situation is as follows:

Almost 34% have increased the salaries of their employees,
24% reduced them,
42% left them at their current level.

Recall, according to Rosstat, the real disposable cash income of Russians in the third quarter of 2020 showed a decline of 4.8%. With an 8.4% decline in the second quarter, this is just a breakout.

Most alarmingly, the number of Russians with incomes below the subsistence level in the second quarter of 2020 is determined at 19.9 million people, or 13.5% of the population.

As Russian President Vladimir Putin said at a recent press conference, the situation with unemployment and declining incomes for Russians is difficult.

Therefore, one of the solutions for assistance is the proposal to introduce ration cards and free meals for the poor . The Public Chamber of the Russian Federation believes that this will be the right measure during a crisis and pandemic.

The authors of Ura.ru note that the OP stated that “although the authorities have fixed upper limits on prices for butter and sugar, such a measure will only be in effect for three months. Prices will be frozen for a” short time “, after which they” will be dictated again market”.

So, not all experts are willing to talk about what awaits the Russians – a skinny “pandemic kilogram” and eight dozen eggs.

For example, in the telegram channel “Mayday. Dive Chronicles” it is said that in the light of the war declared by the authorities on food prices in 2020, a massive decrease in the volume of traditional packaging will continue.

At the same time, the price of the product will remain the same – its growth “due to the increase in the cost of gasoline, the price of entry to the shelf, etc.” will not happen. Of course, buyers talk about deception, but manufacturers have their own reasons for this (not even excuses) – they say, this is a response to the “decline in the purchasing power of the population.” (source)

Price controls are something that only come in during times of major crisis. For example, price controls on selling hand sanitizer during the early phase of the COVID pandemic, or on bottled water in a hurricane disaster zone.

But price controls on food or fuel for a nation? When this happens, it is frequently a sign of national instability, and means that something is very wrong.

I am not saying that ‘Russia is collapsing’, but rather, pointing out that with the trends towards economic chaos, these trends are not isolated to the US or the west, and they also are interconnected to other nations in the world who will experience the same problems, and possibly even worse than those in the US. The distribution changes, but not the fundamentals, and given that economics precedes politics, considering the global economic problems exposed by this virus, it is only inevitable that the political ‘cracks’ in the system will become much worse and have a strong chance of leading to a global war.