You are here: Home › Russian Scientist Working On COVID Vaccine “Plummets” To His Death- What Happened? 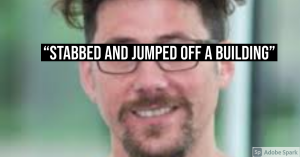 With the world racing for a COVID-19 vaccine, there are a lot of scientists doing work around the clock to stop the current pandemic. However, according to the New York Times from multiple sources, one scientist working on this vaccine in Russia has unexpected died in a strange and tragic way.

A prominent Russian scientist who was working on a COVID-19 vaccine was found dead with a stab wound after plummeting out his window in St. Petersburg, according to news reports.

Alexander “Sasha” Kagansky, 45, was in his underwear when he fell to his death from his 14th-floor apartment, according to the Russian newspaper Moskovsky Komsomolets.

Police believe there was a scuffle before Kagansky fell from the building, reports said.

Russian police say they are investigating Kagansky’s death as a possible homicide and questioning a 45-year-old man as a potential suspect, e2news.com said.

Kagansky, best known for his work on cancer research, was an assistant professor in Vladivostok and had spent 13 years working in Edinburgh, Scotland, until 2017, the outlet said.

He was most recently working as director of the Center for Genomic and Regenerative Medicine at Russia’s Far Eastern Federal University.

He had been working on developing a vaccine against the coronavirus, e2news said.

Kagansky’s body was found by a neighbor on Zamshin Street, the report said. (source)

I am going to say something here that I have written about. I want to be explicitly clear that I have absolutely no proof about anything. In fact, everything I am about to write here is strictly an opinion rooted in absolutely nothing more than stories and experience.

In the posts that I have done, I have clearly described how I knew many people growing up from the former USSR, and they shared many stories with me. I learned a lot from them, and many were very insightful on life “behind the Iron Curtain”.

One of the stories I heard from not a few people was that when people “committed suicide” by jumping off of buildings, or having mysterious “falls” to their death, these were assassinations by the KGB. However, these people also said that the assassinations were so obvious that it became a joke, such as shooting or stabbing the particular victim before he “fell” or “jumped” to his final end.

So here is a story where a Russian Jewish (the name Kagansky is not Slavic at all, but absolutely is a name associated with Russian Jews) scientist “jumps off of a building”, at which time there is also evidence he was stabbed too.

I want to be clear that I have no evidence in the case itself, but all of the marks of the case indicate this was a murder.

The question I have is, who is this Aleksandr Kagansky, and if he was murdered, why did this happen?

The man was clearly a smart person. He was involved with the Center for Genetic and Regenerative Medicine in the Russian far east, and was an advocate of plant-based medicines as well as cancer research, and seems to have quite a work history behind him.

There are many possible theories, but something I wonder about is if he knew about the so-called COVID vaccine that Putin has been advocating for and, possibly, that the whole thing is a fraud or worse.

Again, I am not going to assume that Putin is lying or that what I have suggested as a possibility among many is the truth as to what happened. However, the claims that Russia developed this ‘vaccine’ and then Putin ordering the nation to be vaccinated while he refuses to get it is very suspicious. It has the feel that something is very wrong or dishonest, and that this ‘vaccine’ not only may be unhelpful, but actively harmful to many.

Given Kagansky’s brain and his field of research, it is possible that he may have known or figured out this vaccine was a fraud, and potentially expressed opposition to it. We don’t know if this is or is not what happened. We can only speculate.

However, the fact that Russia arrested suddently a 45-year-old man supposedly in connection with this is also suspect. Who is this person? Why would he want to stab and then throw this high-profile scientist off of a rooftop? Why not just stab him?

There are too many questions, and not enough answer. Such is never a good thing, since often it points to something deeper.

But that said, I wonder what happened, because something is not right here, and it will be interesting to see what future reports uncover.