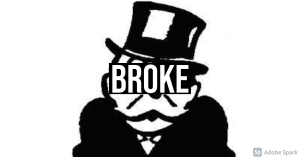 You heard me say it at Shoebat.com. You saw me emphasize it over and over at the end of so many pieces. You may have been sick of hearing about it, but I kept telling you because there were too many trends suggesting that it was going to happen. Sure enough, now it is happening.

Is it the end of the world? In the macro-sense no, but for many people it may feel that way, as COVID has either caused them to become unemployed or lose income. As a result, a recent study found that in 2021, 62% of Americans are looking to get a second job to help pay bills.

For 60 percent of America, rebuilding their savings tops the list of financial resolutions to accomplish in 2021. That’s closely followed by becoming debt-free (56%), improving their credit score (53%), and starting that emergency fund (51%).

More than half of the poll (55%) say they need advice on how to budget properly. Seventy-four percent also hope to improve their financial literacy next year. Three in ten plan to set up automatic savings to make their money dreams come true. At the moment, only 15 percent say they have an excellent knowledge of finances. Just over 40 percent say their knowledge is good, but not the best. Close to two-thirds of all respondents (63%) regret not taking their finances more seriously sooner. (source)

I have said many things at the end of my articles. The one I am referring to is where I constantly emphasized that if you can, work as many hours as possible, save your resources, and try to get a second job, in whatever arrangement suits your situation. I said this because the trends indicated that future economic problems were going to get a LOT worse, and this would be one of the best ways to hold off problems and then to surmount them.

It is now happening. Most Americans- five out of eight -are looking for extra work.

That is how serious this economic crisis is, and it is going to get worse.

I also want to be explicitly clear, I am not happy that I am right. I am rather sad, because being “right” here means the suffering of many. To the contrary, I write what I do because I want your good and that for all. However, in order to do that, often it means discussing difficult, uncomfortable, or hard things.

If you have not done so already, please consider looking for work starting NOW, or getting as many extra hours as you can. The problem is not the virus. It is the fallout from the virus that is impacting so many people, and will have ongoing economic consequences that likely will culminate in significant economic and political destabilization, if not as a direct effect, then as a catalyst noted in history books that cause later actions to happen just as the 1918 Spanish Flu pandemic was similarly connected to the rise of extreme global politics that gave way to the Second World War.