You are here: Home › Now The Queen Is Being DeepFaked 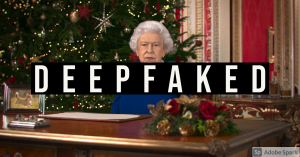 I said before that deepfakes, a trend that began in the adult entertainment industry, WILL be used to fundamentally alter the way we see the world. It’s NOT about adult content- it’s about legitimizing this technology and making it something that will have permanent effects on how we live, process information, and perceive life.

Another major development was just made as according to an article from Yahoo! News, the Queen of England has been deepfaked into giving a major speech criticizing people over COVID regulations.

The British broadcaster Channel 4 has sparked controversy with a deepfake video portraying an alternative festive broadcast set to be broadcast on Friday.

Queen Elizabeth II releases a yearly video address to the nation at 3 p.m. on Christmas Day, reflecting on the highs and lows of the previous year. The message usually focuses on a single topic, and in 2020 it will likely focus on the coronavirus pandemic and its impact on the UK.

Channel 4’s alternative, however, will be a little different.

The five-minute video shows a digitally altered version of the Queen, voiced by actor Debra Stephenson, discussing several of the Royal Family’s most controversial moment this year, including Prince Harry and Meghan Markle’s departure from royal duties, and the Duke of York’s relationship with disgraced financier and alleged sex offender Jeffrey Epstein, The Guardian reported.

A clip of the video published by the BBC shows the fake Queen joking “there are few things more hurtful than someone telling you they prefer the company of Canadians” – a reference to Harry and Meghan’s move to Canada.

The video was originally intended to give a “stark warning” about deepfake technology and fake news. (source)

This is funny, but it’s not a joke, because one really cannot tell the real queen apart from the video.

Again, realize the potential this has to manufacture video evidence, effectively abolishing the video as a form of admissible court evidence long-term.

It can exonerate the guilty. Or frame the innocent.

It can also be used to create fake people who do fake things. For example, a fake terrorist group or network that doesn’t exist, and never did, except in a video.

I have talked about how the 2020s is going to be a decade of acceleration, and we are seeing this. Deepfakes, robotics, extremism, and all other kinds of things are pushing forward a new vision of the world and how we live before our eyes.

Deepfakes are no longer science fiction. They are a part of life, and something that we will have to deal with for the future. It also means that one must be very careful when processing information, because as a trend, one will have to make decisions based on sound principle, lest one be unable to trust anything any longer because one’s eyes and even own mind will deceive him since the tools to achieve such deception are at never before seen levels of functionality and effectiveness.

It is a brave, new world, and we are walking into it.