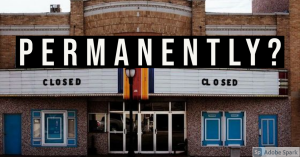 I have noted for a while that has a result of the fallout from the COVID pandemic, a lot of people are going to lose their jobs. The most exposed industries will fall first, which are usually those in the arts and entertainment. I can speak about this from the experience of a friend for many years who works in the entertainment business and is also a theater professor, and who has experienced significant troubles because of COVIO-related issues.

Now this goes well beyond people in theater and music- it affects all, but that is just the arguably most exposed group. That said, even the New York Times is making note of this trend, since it reports that ‘legions’ of performers have been or are about to be potentially put out of work for good.

In the top echelons of classical music, the violinist Jennifer Koh is by any measure a star.

With a dazzling technique, she has ridden a career that any aspiring Juilliard grad would dream about — appearing with leading orchestras, recording new works, and performing on some of the world’s most prestigious stages.

Now, nine months into a contagion that has halted most public gatherings and decimated the performing arts, Ms. Koh, who watched a year’s worth of bookings evaporate, is playing music from her living room and receiving food
Pain can be found in nearly every nook of the economy. Millions of people have lost their jobs and tens of thousands of businesses have closed since the coronavirus pandemic spread across the United States. But even in these extraordinary times, the losses in the performing arts and related sectors have been staggering.

During the quarter ending in September, when the overall unemployment rate averaged 8.5 percent, 52 percent of actors, 55 percent of dancers and 27 percent of musicians were out of work, according to the National Endowment for the Arts. By comparison, the jobless rate was 27 percent for waiters; 19 percent for cooks; and about 13 percent for retail salespeople over the same period.

In many areas, arts venues — theaters, clubs, performance spaces, concert halls, festivals — were the first businesses to close, and they are likely to be among the last to reopen.

“My fear is we’re not just losing jobs, we’re losing careers,” said Adam Krauthamer, president of Local 802 of the American Federation of Musicians in New York. He said 95 percent of the local’s 7,000 members are not working on a regular basis because of the mandated shutdown. “It will create a great cultural depression,” he said.

The new $15 billion worth of stimulus aid for performance venues and cultural institutions that Congress approved this week — which was thrown into limbo after President Trump criticized the bill — will not end the mass unemployment for performers anytime soon. And it only extends federal unemployment aid through mid-March.

The public may think of performers as A-list celebrities, but most never get near a red carpet or an awards show. The overwhelming majority, even in the best times, don’t benefit from Hollywood-size paychecks or institutional backing. They work season to season, weekend to weekend or day to day, moving from one gig to the next.

The median annual salary for full-time musicians and singers was $42,800; it was $40,500 for actors; and $36,500 for dancers and choreographers, according to a National Endowment for the Arts analysis. Many artists work other jobs to cobble together a living, often in the restaurant, retail and hospitality industries — where work has also dried up.

They are an integral part of local economies and communities in every corner of rural, suburban and urban America, and they are seeing their life’s work and livelihoods suddenly vanish. (source)

As the Times notes, this is not just “random” entertainment. These are serious performers, people with music degrees, and very educated, refined, intelligent people, all who have had their livelihoods stripped from them.

This is just the beginning. Things are going to get a lot tougher most likely, and the effects are not going away.

We are watching more than just a trend to war too. We are watching a trend of a fundamental cultural shift in progress, and this is but one of many steps happening as we speak in this process.

This is why I want to say that as 2020 leaves, do not expect things to get better. Expect them to get worse, and use this knowledge to better yourself. COVID did not cause this, but just exposed what was there. It was coming for over a decade, and instead of letting what must happen occur, it was delayed, and we are just facing the inevitable consequences.

In terms of things like music, culture, and arts, a trend to look for here is increasing localization. If arts cannot or will not be supported on a ‘macro’ level for financial reasons, then they will still survive, and can survive, but on a ‘micro’, and less for profit or even non-profit (as in no pay) level. Some things will disappear, others will stay the same, and maybe even some new things can be born again.

Merry Christmas, The Yom Kippur War, And Some Thoughts This Christmas
Now The Queen Is Being DeepFaked
Follow