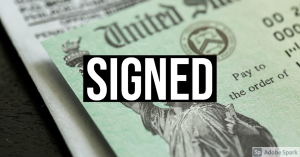 President Donald Trump signed a $900 billion pandemic relief package Sunday, ending days of drama over his refusal to accept the bipartisan deal that will deliver long-sought cash to businesses and individuals and avert a federal government shutdown.

The massive bill includes $1.4 trillion to fund government agencies through September and contains other end-of-session priorities such as an increase in food stamp benefits.

The signing, at his private club in Florida, came amid escalating criticism over his eleventh-hour demands for larger, $2,000 relief checks and scaled-back spending even though the bill had already passed the House and Senate by wide margins. The bill was passed with what lawmakers had thought was Trump’s blessing, and after months of negotiations with his administration.

His foot-dragging resulted in a lapse in unemployment benefits for millions struggling to make ends meet and threatened a government shutdown in the midst of a pandemic.. But signing the bill into law prevents another crisis of Trump’s own creation and ends a standoff with his own party during the final days of his administration.

It was unclear what, if anything, Trump accomplished with his delay, beyond angering all sides and empowering Democrats to continue their push for higher relief checks, which his own party opposes.

In his statement, Trump repeated his frustrations with the COVID-19 relief bill for providing only $600 checks to most Americans instead of the $2,000 that his fellow Republicans already rejected. He also complained about what he considered unnecessary spending by the government at large. (source)

I’m going to put forth a proposition here. More of a prediction, but still something that one must look forward to.

Look for $2000 per person stimulus checks in the future.

Don’t expect them right away. Wait a year or so, maybe less. The reason I say this is based on the same logic that I said before, when I predicted that one printing would lead to another.

As I have said, once the money printing starts, it CANNOT stop because of economic fundamentals. The reason why companies are still receiving financial bailouts either directly or indirectly (tax relief, interest-free loans, etc.) is not an accident. Monetary printing, especially as a means to pay bills that cannot be serviced by natural means of income due to economic realities, is never a solution because it means that, as a fundamental rule, one’s fixed expenses outweigh one’s income. When this happens, it is always a bad sign.

This first happened to American companies. Now it is happening to Americans. The government is quite literally bailing out individuals just like major corporations in order to keep the economy afloat.

First there was the original COVID bailout. Then Mnuchin hinted at a second. Here we are, just over six months later, with a second bailout.

If you are thinking about a third bailout, don’t worry, because it is likely going to come. The people expect it and have been primed for it, and economically speaking, since fundamentals are not changing, the common man is going to need another bailout.

Until there is a great chance that the dollar itself, as with many countries of the past, is worth the paper it is printed on.

Such is the story of many nations, and unless things change drastically here, is at risk of happening in the US.