You are here: Home › NATO Chief Declares That Armed Drones Will Be Necessary For Military Use 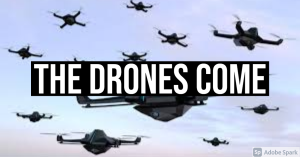 Shoebat.com recently pointed out how drones were used with deadly success in Nagorno-Karabakh to inflict severe casualties on the Armenian troops so that Azeri, and by proxy Turkish, troops could win. This represents a shift in the face of war, where the gun, while necessary, in the hands of a man is heading toward a similar future of the musket and 19th century war tactics as World War I began.

Now according to NATO Chief Jens Stoltenberg and reported by Defense News, he has declared that drones will be necessary for NATO to have in a military capacity.

NATO Secretary-General Jens Stoltenberg said he supports the use of armed drones to protect soldiers’ lives, wading into a fierce debate in Germany about buying such technology for future operations.

Stoltenberg told the German press agency DPA that the alliance would use weaponized unmanned aircraft in accordance with international law and in support of deployed troops. “These drones can support forces on the ground and reduce the number of pilots we send in harm’s way,” he was quoted as saying.

His comments come as the question of arming drones has caused a major kerfuffle between the CDU and SPD parties, which form Germany’s coalition government. Specifically, the disagreement is about whether the Bundeswehr should be allowed to lease Israeli-made Heron TP drones armed with missiles. More broadly, though, the debate is about different visions for Germany as a participant in the military fabric of the West.

Earlier this month, the SPD leadership decided to reject the acquisition of armed drones in principle, arguing that a broad debate here on ethical aspects of their use had not yet taken place, as prescribed in the government’s coalition agreement.

The party’s surprise move came after defense department officials had formally studied the issue for the better part of the year as part of a public campaign, holding hearings with experts of various backgrounds and sending a final report to lawmakers.

The SPD parliamentary spokesman on defense matters, Fritz Felgentreu, who backs the use weaponized drones under limited conditions, resigned his job in protest, arguing the party leadership’s claim of a lackluster drone debate was dishonest.

Following Stoltenberg’s remarks to DPA on Wednesday, Felgentreu joked on Twitter that the secretary-general would make a “smart Social Democrat,” a reference to his own party.

Stoltenberg’s stance is unlikely to sway any opinions here, as those rejecting armed drones for the Bundeswehr are unlikely to be glowing NATO supporters to begin with. (source)

The future of war is not men. It is more like the Terminator film series, with battles being waged by robots with humans as augmented participants. This more closely resembles the ‘augmented humanity’ model discussed as one of the futures of AI and robotics in practical use. Likewise, those humans who do not ‘adjust’ to the ‘new reality’ may find themselves like many British soldiers in World War I using 19th century tactics or, more recently, like many Armenians fighting the Azeris, who quickly found that their weapons and training were no match for a robot.

Everyone Needs An African Friend
Trump Signs The $600 Checks, Wait For The $2000 One
Follow