You are here: Home › German Military Officer Caught Disguising Himself As Terrorist Refugee, And Lesson From Trading Places 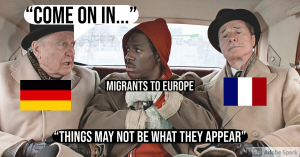 For a long time, violence from migrants to Europe has been discussed. Many of the stories from horrible things that people have experienced are true and cannot be discounted. However, as with all things, it is important to present balance, and to note that it is not all migrants, and that the migrants are seemingly being treated in a way so to encourage or bring out the worst in them and among them. Likewise, one has not discussed the potential of overemphasizing or underemphasizing various aspects of their collective behavior in order to shape a particular image of how many are responding.

But this is just the beginning, for according to Dnyuz, a whole separate dimension has been added to this picture, where a German military officer has been arrested for posing as a migrant to Germany and plotting to commit terrorism in order to have it blamed on migrants.

At the height of Europe’s migrant crisis, a bearded man in sweatpants walked into a police station. His pockets were empty except for an old cellphone and a few foreign coins.

In broken English, he presented himself as a Syrian refugee. He said he had crossed half the continent by foot and lost his papers along the way. The officers photographed and fingerprinted him. Over the next year, he would get shelter and an asylum hearing, and would qualify for monthly benefits.

His name, he offered, was David Benjamin.

In reality, he was a lieutenant in the German Army. He had darkened his face and hands with his mother’s makeup and applied shoe shine to his beard. Instead of walking across Europe, he had walked 10 minutes from his childhood home in the western city of Offenbach.

The ruse, prosecutors say, was part of a far-right plot to carry out one or several assassinations that could be blamed on his refugee alter ego and set off enough civil unrest to bring down the Federal Republic of Germany.

The officer, Franco A., as his name is rendered in court documents in keeping with German privacy laws, denies this. He says he was trying to expose flaws in the asylum system. But his elaborate double life, which lasted 16 months, unraveled only after the police caught him trying to collect a loaded handgun he had hidden in an airport bathroom in Vienna.

“That was really a shocking moment,” said Aydan Ozoguz, a lawmaker who was commissioner for refugees and integration at the time. “The asylum system should identify cheaters, no doubt. But the bigger story is: How could someone like this be a soldier in Germany?” (source)

One of my favorite films is the 1983 comedy Trading Places with Dan Aykroyd and Eddie Murphy. In the film, Winthorp Louis III’s (played by Aykroyd) bosses, Duke and Duke (played by Ralph Bellamy and Don Ameche) destroy Aykroyd’s life as a wealthy commodities broker and switch him with a homeless convict named Billy Ray Valentine (played by Murphy).

This involves using their associate, Mr. Clarence Beeks (played by Paul Gleason) to do a series of dirty tricks on Aykroyd that he and his friends are totally unaware of, leaving Aykroyd friendless, jobless, broke, and miserable while he has no idea about what happened.

This idea of destroying one man’s life and presenting an image to the world as to his ‘evil actions’ seems to be, to me, what is happening with a lot of the migrants. Again, I want to be clear that there are a lot of serious problems from them and the experiences of many cannot be discounted. That said, it is wrong to blame them as a collective for the actions of some, and to ignore how many are fleeing serious violence in their native lands started over geopolitical conflicts, and that their arrival to Europe is not an ‘invasion’, but the taking up of an invitation extended to them by the Europeans. To use an example, it would be like a man burning a neighborhood down, then inviting the people whose houses he burned down to live in his house, then shouting loudly and complaining at them for taking up his offer he made to them.

In the case of the migrants, the public is being treated like Aykroyd. They are unaware of what is going on to them, being mistreated by their own governments who, like Paul Gleason, are doing this on behalf of very wealthy financial, military, and occult interests. Meanwhile, the common man is left confused and angry, similar to how Aykroyd was furious at Murphy until he realized what was happening.

The way that Aykroyd and Murphy together get their revenge, however, is not by violence or murder, but by using their minds to strip the Duke brothers of their money, and make themselves rich while leaving the Dukes broke.

Now I mention this end because ultimately, there is something to be said here about the future of conflict in Europe and the world.

The way to win in this conflict being encouraged is ultimately not to play, and to aggressively refuse to participate in it, and if forced to participate, to do so in a way that is as non-or-anti-participatory as possible.

There is no winner in supporting any side other than the collective good, for both migrant and native alike. This is why the Church has been so careful about what She formally says, for in spite of many different factions and divided ideas within her, the fact is that one cannot support ideas that lead to mass murder because that is a sin. This is the main point of the anti-National Socialism encyclical Mit Brennender Sorge, written by the Servant of God Pope Pius XII and Pope Pius XI, which stated that

Whoever exalts race, or the people, or the State, or a particular form of State, or the depositories of power, or any other fundamental value of the human community – however necessary and honorable be their function in worldly things – whoever raises these notions above their standard value and divinizes them to an idolatrous level, distorts and perverts an order of the world planned and created by God; he is far from the true faith in God and from the concept of life which that faith upholds. (source)

Heaven is not an ethnic club for any one particular race. The sons of Ham, Shem, and Japheth alike and their children have places, and not separate from each other, but to call their own in the context of mingling freely with each other. It is the how the Catholic Church has never opposed national identity, but permitted and even encouraged it so long as it is under the spiritual empire of Christ, to Whom all men are subject and must obey, and the greatest among them is not the one with the most money or power, but the one who desires and obeys as Christ has commanded, being the humblest among men instead of the ‘greatest’.

This is the warning here that we can see with this migration situation, where there are people who are even going so far as to pretend to be migrants in order to stir up social division and violence, leaving the public, like Dan Aykroyd in Trading Places, angry, broken, and confused, and all at the wrong sources until he figures out what is happening to him.

What is happening right now is aware for those who pay careful attention, and the way to win at this game is not to play, because in the end, just like in Trading Places, he who stays away from the chaos ultimately is the victor, and those who play the games of lying, cheating, manipulation, division, and destruction for gain are the ones who will lose everything they have.