You are here: Home › Round Two Of Trump Bucks Continues 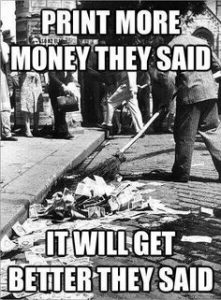 Printing money as a form of economic stimulus without fixing the underlying problems latent that caused them is like a Pringles commercial. Instead of “once you pop you just don’t stop,” it becomes “once you print you just don’t stop,” and the reason is because by adding money to the system, it speeds up the consumption rate of said money through spending. If the spending were to stop, the economy would crash. However, since at this point the only think keeping the economy functioning is the printing, more must be printed until the value of the currency peters out itself. Think of this like spinning a wheel faster and faster to prevent it from falling off of the spoke, and eventually, it is moving so fast that the spoke breaks and the wheel flies off and crashes on its own, because this is what we are doing right now.

As such, the US Treasury is sending out $600 checks while another series- a third round -totaling $2000 per American is being debated.

In a series of tweets tonight, Treasury Secretary Stephen Mnuchin confirmed that the US Treasury has delivered a payments file to The Fed for “Americans’ Economic Impact Payments.”

These payments may begin to arrive in some accounts by direct deposit as early as tonight and will continue into next week.

Paper checks will begin to be mailed tomorrow.

Generally, if you have adjusted gross income for 2019 up to $75,000 for individuals and up to $150,000 for married couples filing joint returns and surviving spouses, you will receive the full amount. (source)

Make no mistake, the third round will come.

Because it has to. There is no way to stop the printing and avoid a political disaster.

I warned you all about this for years. It’s not unique, just history happening in real time, and we are witnesses to it.

If you can, use the money to pay down debts, and ideally consider investing in a tangible asset that can preserve or grow in value. Ideas I have noted before, without giving financial advice, are gold, silver, land, and even livestock.

Perhaps things can still change. I really hope so, but the patterns of history are not favorable right now given the circumstances.

Hope for the best, but prepare for the worst, because the US is heading down the path of Weimar Germany, ZANU Zimbabwe, Allende’s Chile, and post-Soviet Russia in terms of her financial decisions, and if one is not prepared, it will destroy savings accounts and leave America looking a lot poorer and like the old world she so often promised to be a refuge from.

It is going to be an interesting ride next year.