You are here: Home › Russian Orthodox Church Defrocks Major Voice Against Sodomy On Charges Of “Blasphemy” 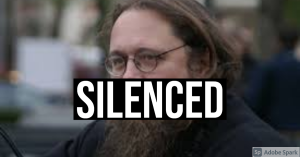 The Russian Orthodox Church has a sodomy problem in its ranks. I have detailed this on Shoebat.com where priests, bishops, and even entire seminaries (such as the one in Kazan) are filled with homosexuals who sodomize each other and nothing is done to stop it. But unlike the Catholic Church, where the scandal is open and called out by many, in the Russian Orthodox Church, it is kept secret, and those who attempt to expose it are abused or thrown out.

One of the very brave ROC voices against sodomy has been Fr. Andrei Kurayev, profiled here at Shoebat.com, who became famous for being one of the only orthodox voices to expose the rampant sodomy among the clerical ranks, for which he has been continually and viciously attacked over. Now, according to RBC, Fr. Kurayev has been inexplicably defrocked for “blasphemy”.

Protodeacon Andrei Kuraev by the decision of the Diocesan ecclesiastical court of Moscow was recognized as subject to “ejection from dignity.” The court ruled in absentia – Kuraev did not appear at the meeting, asking to postpone the meeting until January, because “on New Year’s Eve, Moscow is stuck in traffic jams, and it is dangerous to take the metro because of the pandemic.”

“The court had a judgment that on April 21, 2020, a supernumerary cleric published in his LiveJournal an insulting description of Archpriest Alexander Ageikin, who died from the consequences of coronavirus infection that day,” reads a statement on the website of the Moscow City Diocese.

In a post on April 21 on his blog in LiveJournal, Kuraev wrote: “The first death among Moscow clerics. Archpriest Alexander Ageikin, rector of the Yelokhovsky Cathedral, died at the hospital in Lapino. In my memory, this under-protopresbyter will remain as a stupid careerist who has made a career in the field of VIP service. ”

In Kuraev’s words, the court saw signs of “blasphemy against the Church.” The court concluded that Kuraev “did not change the nature of his actions after admonitions from the diocesan confessor, Archpriest Georgy Breev and members of the disciplinary commission back in 2015”.

The decision to depose Kuraev from his dignity will enter into force if approved by the ruling bishop, Patriarch Kirill of Moscow and All Russia. Until then, it can be appealed.

At the end of April, Patriarch Kirill issued a decree banning Kuraev from the priesthood in connection with statements about Ageikin. In the decree of the patriarch, Kuraev’s behavior was called “immoral” and “especially cynical.” (source)

These “blasphemy” charges are not clearly explained, of course, because that is not the issue. From what one knows of his history, and given the proliferation of sodomy in the ROC and as well the acceptance of men such as Aleksandr Dugin, who was involved with Yevgeny Golovin and Jamal Haydar in a sodomite Nazi cult during the 1970s and 1980s where they drank each others’ urine in satanic rituals, as “good orthodox” without acknowledging or dealing with this past, it is another scandal on a scandal.

I have said before that the sodomite problem in the Catholic Church is bad, but that the Orthodox Churches is just as bad or worse, and in all cases, is worse in so far as the problem is actively hidden as opposed to being exposed, for while exposure hurts, it is the only way to see that healing can happen.

It is also not just the Russians, for major scandals have been found among the Greek Orthodox and even the Oriental Orthodox Coptic Church. The problem is worldwide, and it is all serious.

Getting rid of Fr. Kurayev will not help the Russian Orthodox Church or a religious cause, but like in the American past with the Catholic Church, it will only cover up a sordid reality that will continue to fester and rot the religious body from within. Unless it can be clearly shown that Fr. Kurayev was truly a “blasphemer” worthy of being defrocked, all signs do not point to “blasphemy” as the cause, unless “blasphemy” means daring to speak out against the proliferation of sodomite behavior consuming the world and ecclesiastical ranks.