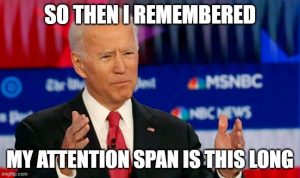 Many heralded the Biden administration as one that would ‘unify’ the nation, but as American history shows constantly, unity is seldom achieved in peacetime, and the only real act that unifies Americans, the incredibly diverse and often times opposing thing that she is, almost every time is a war.

That said, many hopes were dashed as the New York Post reports with the recent “Biden Blitz” of Executive Orders, largely aimed at undoing Trump’s previous policies. Biden refused to take questions from reporters, and most conversation was redirected to White House Speaker Jen Psaki.

Amid mounting criticism of his record-pace executive order blitz — including from liberal media outlets like the New York Times — President Biden refused to take questions from reporters Thursday as he signed two more such actions.

The president’s latest orders will open a special enrollment period for the Affordable Care Act and end the “Mexico City Policy” that bans US federal funding for non-governmental organizations that provide abortion counseling.

“Today I’m about to sign two executive orders to, basically, the best way to describe them, undo the damage Trump has done,” Biden told pool reporters.

In a bid to undo many of the initiatives of the previous Trump administration, Biden has signed a record 40 executive actions in his first week in office.

“These directives, however, are a flawed substitute for legislation.”

At a briefing Thursday, White House press secretary Jen Psaki pushed back on questions from reporters suggesting that Biden’s slew of executive actions went against his own calls for “unity” in Washington.

Psaki said Biden had made clear that he didn’t believe executive action should be used for everything, but claimed the president needed to move quickly to undo the signature policies of the Trump administration.

“There are steps, including overturning some of the harmful, detrimental, and, yes, immoral actions of the prior administration that he felt he could not wait to overturn, and that’s exactly what he did,” Psaki insisted. (source)

With all respect to Biden, it is not a surprise that he is not being allowed- I emphasize allowed -to speak, because I am not entirely sure that he is fully aware of where he is.

I watched the above clip many times. I listened to it for a while. I must say, in my personal opinion, it truly does sound like Biden is saying “I don’t understand what this is” and Kamala is saying “Sign it”.

Biden has consistently shown lapses in memory and judgement. He doesn’t really seem to know where he fully is, and as many people have pointed out, he has signs that suggest some form of dementia or Alzheimer’s disease. We do not know for sure what he may or may not have, but clearly, something does not seem right with Mr. Biden, considering his responses and reactions to what should be simple things all throughout the campaign trail and then after as president. If anything, it appears that he is being ‘guarded’ and essentially, used for his position in office while keeping the public from being able to officially know what exactly is going on.

Back in November 2020, I pointed out how Biden began yelling at a reporter for asking a simple question, at which time the reporter was quickly removed from Biden’s presence. If Trump did this, it would be national or international news. But Biden? Silence. Likewise, Biden’s yelling did not seem to be pointed, but almost incoherent, the sort of yelling from a sick, old man whose mind is not what it once was.

I say this because the Biden “presidency” seems it could be the shell of a man whose mind is long gone and instead of enjoying the rest of his life in peace, he has been put in the spotlight of the world with people around him who are using him like a puppet to do what they want without care for his health.

It looks a lot, from the outside, like elder abuse in the worst way.

People are angry at Biden, but the real people to be angry with are Kamala, Biden’s staff, and Biden’s own wife and family who pushed him into this position. Biden has many bad ideas, but in many ways, he is also equally a victim of those around him.