You are here: Home › US Considers RICO Charges Against Capitol Protesters 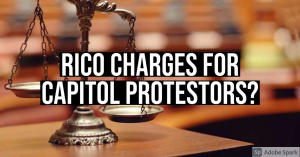 The RICO, or Racketeer Influenced and Corrupt Organization Act of 1970, was created in response to the rise in gang activity and was used to significantly reduce the power of Cosa Nostra and other of such groups. It is a federal law and carries major penalties with in, including asset forfeiture, so a RICO charge is a serious thing and not to be taken lightly.

Following the January 6th protests in Washington and the temporary actions inside the Capitol building, there has been much talk about aggressively prosecuting participants. This bears in strong contrast to the burning, looting, and mayhem protests seen over the summer in many cities, which have overall seen their participants receive little to no media time and seemingly go, generally speaking, unmolested about their daily affairs. Now in another development to the capitol protests, Reuters news reports that some prosecutors are considering the application of RICO charges against the participants.

The U.S. Justice Department is considering whether to charge members of far-right groups involved in the deadly Jan. 6 storming of the Capitol under a federal law usually used against organized crime, according to two law enforcement sources.

The sources, a current law enforcement official and a former official who recently left the federal government, said using the RICO statute to charge people involved in the Capitol violence is being debated within the Justice Department, with no final decision made. The sources spoke on condition of anonymity.

The siege by supporters of former President Donald Trump left five dead including a police officer. It is not yet clear if cases arising from it meet “statutory elements” necessary for a RICO charge, the former federal official said.

“This is something that is being mulled over in the halls of DOJ,” the official added, using the department’s initials.

President Joe Biden’s administration has warned that domestic extremism is a growing threat following the Capitol rampage, a sharp departure from the way Trump regarded extremist groups such as the Proud Boys and Oath Keepers. In a September pre-election debate with Biden, Trump told the Proud Boys to “stand back and stand by.”

Justice Department spokeswoman Kristina Mastropasqua declined to comment about the potential use of the RICO statute beyond pointing to prior statements by the senior federal prosecutor for the District of Columbia, Michael Sherwin, that he would charge people based on what the evidence showed.

Sherwin has said a wide range of criminal charges are being contemplated, including trespassing, assault and seditious conspiracy. (source)

If RICO charges were to be brought, it would likely represent a serious decline in civil liberties, since while it would seem difficult to prove conditions necessary for RICO, the mere bringing of said charges is enough to permanently destroy a man’s life and that of his family. If applied broadly enough, such as it seems that it could be done here, it would wipe out countless people’s abilities to live.

The trend here it seems is to send a message that certain kinds of actions are OK and others are not, and that if one is identified as participating in such actions, they will be ruthlessly persecuted up to almost the point of death. Almost should be noted, because as history shows, of which the US is not an exception, eventually such violent persecutions can make the final jump, and the politically rancorous climate of the current time does not make the situation any better.

Political violence is a trend that is going to grow, and with that the related trends of a loss in civil liberties and the aggressive enforcement against certain sides and groups but not others.

In addition, since RICO charges are used to often go after the leadership o gangs, this will be of interest to see what happens with former President Trump, his family, and his cabinet. One of the points that has been consistently emphasized in the media has been a connection between Trump ‘instigating riots’ and the events on January 6th, and considering how this case with him is far from over, if RICO charges were to be brought against the protestors, then it would likely pull Trump and the above groups mentioned into them. In this way, there is a possibility that Trump may face jail time and potentially lose all his assets, not to mention Jared Kushner or other members of Trump’s cabinet.