You are here: Home › Joe Biden Does Has Another “Oh No” Moment, Yells At A Reporter Asking Him Questions 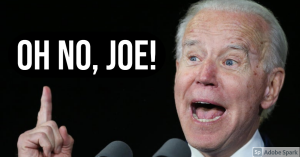 One of the trends I have said to watch for will be “oh no” moments with Biden, for assuming he becomes president- and all signs are currently seeming to point to confirming that which many have already spoken about -his past behavior and actions during the election suggest that Biden may be another George W. Bush as it concerns his gaffes and strange or just confusing statement.

It appears that Biden has had another “oh no” moment as according to a report from Twitter, he started yelling at a reporter asking him questions, snapping at reporter Bo Erickson as he asked: “Mr. Biden, the Covid Task Force said it’s safe for students to be in class. Are you going to encourage unions to cooperate more to bring kids back to classroom, sir?”

Surprisingly, Biden responds angrily “Why are you the only guy that always shouts out questions?”. At that point, Biden’s advisors quickly rushed the reporter out saying “Guys, let’s go! Move! Let’s go! Out!”

In fairness to Trump, what would have happened if Trump did this? It would be a media firestorm, but Biden gets a free pass.

Now on a more serious noted, judging by his staff’s move to clear the room of reporters so fast fter asking, and how Biden seemed to be aggressive, this suggests it was done before things could get out of hand because Biden, as many have noted, is in mental decline and could do something as a result of it that would make him look terrible. In honestly, while reporters are annoying, this is the nature of the press, and Biden’s response, especially given the last four rancorous years toward Trump from the press, was unbalanced, and the reporter was not acting out of place from what we can see.

It is going to be a very interesting four years, assuming (a) he is formally made president and (b) that his clear declining health conditions do not kill him first.