You are here: Home › Eleven Iranians Apprehended At US-Mexican Border In Arizona 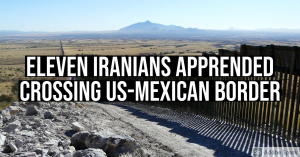 When Biden was elected, something that one could note was that border politics was ‘back on the menu ‘for discussion as a political rallying point. The border has often been used for this in modern times (and hence why no real efforts have been made to fix the situation on the border, to the detriment of both migrant and resident alike), and now with Biden in power, it is being used again.

In an interesting story from the Washington Times, eleven Iranians- a group made up of five women and six men -were apprehended crossing the US-Mexican border into Arizona.

Border Patrol agents arrested 11 Iranians Monday after they sneaked across the border into Arizona.

The five women and six men were traveling as a group, and were nabbed on a bridge near San Luis, a border crossing point. Agents said the group had just crossed the border.

Iran is a “special interest” country for border apprehensions because of its nexus to terrorism, though there was no mention of those concerns in relation to this group. (source)

Since the US has been for all purposes attempting to start a war against Iran, the fact that such a group was arrested may attract attention from those who have an interest in the border issue.

It is unclear that this will have any effect on current political opinions, but considering how border issues are coming back into public fashion, such as they were during the Obama years, this story is rather but one amid a body of stories used in the arsenal of the growing trend of re-politicizing the border.

Notice how even though Trump talked about “build the wall” during this time in office but did nothing, his presence temporarily stopped people from discussing the matter. With Biden taking a seemingly far more liberal in word (but not necessarily as likely in action) migration policy, one can expect to see in preparation for the 2024 elections and beyond plenty of talk about “the border” to try and push people to be vote for their particular party.