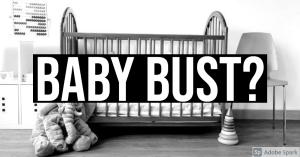 Generally speaking, if one leaves a man and a woman alone long enough, barring strong, consistently applied and conscious choice, the two will try to come together in a union that can generation children. However, if there are social problems, or other unspoken issues, this may not always happen. Either way, when men and women are locked up together and this does not happen, at least in a general, statistical sense, it means that something is wrong.

Since demography is critical to understanding society, I have watched the effects of COVID on fertility with anticipation. The question is, would COVID cause more children, or fewer children to be born? Reuters reports that first results in from Italy, following the first nine months after the lockdowns began, and they are finding that fertility has dropped over twenty percent.

Maybe it was the stress. Maybe it was being cooped up with the mother-in-law. But the numbers are in, and one effect of the coronavirus lockdown is now clear: people made fewer babies. A lot fewer babies.

Births in Italy in December – exactly nine months after the country went into Europe’s first lockdown – plunged by a whopping 21.6%, according to figures from a sample of 15 Italian cities released this week by statistics agency ISTAT.

And the impact is far from over. Marriages fell by more than half in the first 10 months of last year, which ISTAT chief Gian Carlo Blangiardo called “a further factor in a probable decline in births in the immediate future”.

Demographics experts have been predicting a baby bust across Europe for 2021, as the impact of last year’s lockdowns is felt.

While its data is not yet complete, the German statistics office said 2020 was probably the first year since 2011 that the population did not grow, both because of declining births and because COVID-19 meant fewer people immigrated.

Still, there are signs some people who put off making babies in 2020 may be getting down to business at last. Sales of pregnancy tests and pregnancy vitamins in Germany jumped in the last few months, according to a poll conducted for pharmacy news service Apotheke Adhoc.

“The bigger the economic fears, the bigger the impact on the birth rate,” said Martin Bujard, deputy director at Germany’s Federal Institute for Population Research. “So in countries where the welfare state minimises the economic impact – like Germany – there might be less of a negative effect.” (source)

A lot has been made about how Italy is ‘being replaced’ by migrants. This is indeed partially true. However, as the study notes without saying it, one cannot solely blame ‘migrants’ because the natives are not having children.

It is a lot of factors, but to summarize those mentioned before include the decline of religion, a refusal to marry, long periods of cohabitation, the widespread use of contraceptives, career aspirations, accumulating debts, and a selfish view of life that sees no real purpose other than consumption. These problems are worldwide now, and while they are well-known in the US, they are an even more serious problem in Europe, which is of the same nature but amplified because of historical and geopolitical reasons.

The fact is that Italy- and to that most of Europe -is actively dying and this is evienced by their failure to reproduce. Since often times it is migration and to that, migrants who have children at a sustainable level (not even in large numbers), the situation is likely worse than what is being reported. For example, France is the only European nation that is not well-below, but at replacement rate, and almost all of their fertility is driven by immigration and the children of migrants.

The Bible makes very clear that God favors no race except the one that wants his grace, and one shows how one wants or to the contrary, does not want the grace of God by how one spends his money and by how one has children. The eugenic mindset is not merely unchristian, it is anti-life and ultimately leads to one’s destruction. There is no such thing as “too many” people because if there really is an excess number, those people will expand around the world to other places. It is a simple fact of life.

If Italy is a look into current trends, we might want to speculate there could be a major crash in fertility coming, not just in Europe, but in most of the world. Even African nations, which have historically high fertility rates, could potentially see a decline, and it is worth looking into to see if such will be the case there as well.

The Malthusian lie that has been told for centuries is that the world is going to collapse because of ‘too many people’, but to the contrary, it seems that the opposite may happen, which is a collapse as a result of a long-term demographic winter by men refusing to do one of the most basic functions ordered by Sacred Scripture, and that is to “be fruitful and multiply”.