You are here: Home › UN Declares Hunger Situation In Tigray Is “Extremely Alarming” 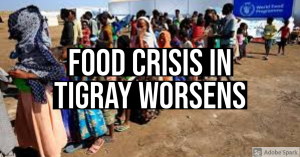 The situation in Tigray is going to be critical to watch because it has the potential to morph, given the other circumstances right now in the entire Sahel region, into a second and far more severe refugee crisis than what hit Europe in 2015 and 2016. This would inevitably propel a rise in nationalism and potentially being a formal transition, in public, towards open militarism, a trend that is already in place, but could become far worse and result in the migrants being blamed for domestic political problems and then explode into violence.

The situation in Tigray, unfortunately, has not improved save for the worse. Now according to the UN and reported on from the AP, the situation is so dire that they are calling it “extremely alarming”.

Life for civilians in Ethiopia’s embattled Tigray region has become “extremely alarming” as hunger grows and fighting remains an obstacle to reaching millions of people with aid, the United Nations said in a new report.

And the U.N. special adviser on genocide prevention warned Friday that without urgent measures the risk of atrocity crimes “remains high and likely to get worse.”

The conflict that has shaken one of Africa’s most powerful and populous countries — a key U.S. security ally in the Horn of Africa — has killed thousands of people and is now in its fourth month. But little is known about the situation for most of Tigray’s 6 million people, as journalists are blocked from entering, communications are patchy and many aid workers struggle to obtain permission to enter.

One challenge is that Ethiopia may no longer control up to 40% of the Tigray region, the U.N. Security Council was told in a closed-door session this week. Ethiopia and allied fighters have been pursuing the now-fugitive Tigray regional government that once dominated Ethiopia’s government for nearly three decades.

Now soldiers from neighboring Eritrea are deeply involved on the side of Ethiopia, even as Addis Ababa denies their presence. Eritrea on Friday rejected “false and presumptive allegations” after the U.S. Embassy there posted a statement online about the need for Eritrean forces to leave.