You are here: Home › Man-Machine Merger Continues As Human Brain Cells Are Interwoven With Microchips 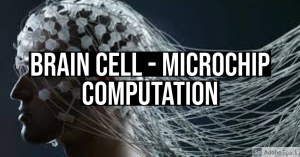 In the science fiction story The Island of Dr. Moreau, written by H.G. Wells, it discusses essentially the tale of a mad doctor who using genetic therapy and what would later become the microchip, creates a race of creature on an island in the South Pacific that he rules as lord over and through which he controls by his genetic modifications. Eventually, the race of creatures rebels against him and kills him, and the story is of a human traveler shipwrecked at sea landing on the island and witnessing the horror and breakdown of Dr. Moreau’s eugenic dream pass.

As much as this was a 19th century story, it was highly accurate in its vision of the future, which is taking place right now as according to futurism magazine, scientists are creating the capability for Dr. Moreau’s dream to be realized as they are interweaving microchips with human brain cells.

Scientists from England’s Aston University are physically integrating human brain stem cells into AI microchips, according to a university press release. The goal, the scientists say, is to push the boundaries of what AI can do by borrowing some of the human brain’s processing capabilities.

The project, dubbed Neu-ChiP, sounds like the beginning of a sci-fi B movie where all-powerful AI runs amok. Typically, projects like this in the field of neuromorphic or brain-inspired computing focus on making AI algorithms more efficient, but Neu-ChiP aims to make them more powerful, too.

“Our aim is to harness the unrivaled computing power of the human brain to dramatically increase the ability of computers to help us solve complex problems,” Aston University mathematician David Saad said in the release. “We believe this project has the potential to break through current limitations of processing power and energy consumption to bring about a paradigm shift in machine learning technology.” (source)

This is a very interesting, and highly disturbing proposition.

If one can hook brain cells to microchips, can one, as what happened in the tale of Dr. Moreau, attempt to control at least in part one’s mind?

Certainly not all the mind can be controlled, as the mind and soul are not but also one in the same. That is, a physical component exists (brain, cells, nerves, etc.), but the anima, the part that makes a human being alive, is not physical, but spiritual.

This is an interesting attempt to, from what it seems, try to either potentially hijack man’s brain based on a purely physical philosophy that assumes there is no soul, or to try to interrupt the body-soul junction that exists to try and ‘intercept’ thoughts to control them. Either way, it is insidious and interesting because it says a lot about the future.

If one looks back to the recent past- the 1950s and 1960s -a lot of people believed that the human race would expand to space. I don’t say this as to support the darwinistic or eugenicist philosophies associated with space travel, but in the objective sense, that if one looks at educational programming, clearly there was a believe that around 1990 or 2000, there could be a moon colony of a sort.

Could this have happened? One can never be sure. But what one can be sure of is that as soon as the 1960s were over, the shift from space changed and has remained such ever since. The eugenicists will talk about space, but the reality is that the “space” being explored is the world of the microchip and atom, and the reason is to build smaller and smaller computers, not necessarily to make life better (acknowledging that many of them have), but to create systems for greater long-term control.

Just as the automobile revolultionized transportation, so did the microchip and now, the bio-electronic integration of a near Kurzweilian persuasion where man, having abandoned religion, is seeking to live forever by integrating himself into the machines that he has build to help himself. This “singularity” is a trend to watch for the future, and aside from the fact that it will fail, events such as these are attempts by man to recreate the sin of Eden but in his own context, and the end is always the same, which is disaster for man because God will not be mocked..