You are here: Home › Biden Promises To Promote LGBT Around The World 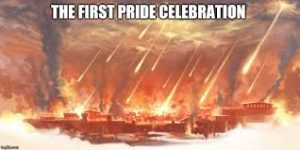 Trump was not fundamentally different in terms of his approach, but nominally speaking, he did not do as much openly to support the proliferation of the LGBT (although under his administration it certainly increased). Now according to AFP by way of MSN News, the Biden administration is pushing a renewed attempt at conforming the world to the LGBT.

Elevating a 2011 initiative launched by his former boss Barack Obama — and reversing a turnaround under Donald Trump — Biden is expanding the scope of US efforts on LGBTIQ rights while also adjusting based on lessons learned over the past decade.

In his first foreign policy speech, Biden announced Thursday he was ordering all US government agencies active abroad to promote the rights of lesbian, gay, bisexual, transgender, intersex and queer people and to come up with plans within 180 days.

“All human beings should be treated with respect and dignity and should be able to live without fear no matter who they are or whom they love,” Biden said in the presidential memorandum.

Biden, who plans a dramatic rise in US admissions of refugees, promised greater attention to LGBTIQ asylum seekers, including by ensuring action on urgent cases even when vulnerable people first flee to countries that are less welcoming. (source)

This trend has been discussed for years on Shoebat.com, and so little has been done fundamentally about it.

For years, people said it was to “stand up” to such groups. However, that time has passed, for more than one reason. This does not mean to submit, but rather, that there is a strong chance that the consequences of one’s own actions will have to be reaped. And as it has been said before, by many saints, is that the abandonment of a people for evil behavior often results in a war or some other form of open conflict.

One will likely not be able to stop” Biden, but rather, it is better to prepare oneself and those around one for what is coming, which as our trends suggest, militarism of a global scale leading to a major war.