You are here: Home › Nagorno-Karabakh Over? The Ottoman War Machine Is Just Getting Started 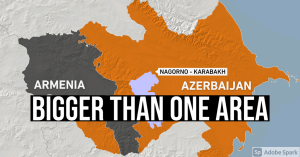 From September 2020 to November 2020, Armenia and Azerbaijan went to war over the region of Nagorno-Karabakh, which has been disputed between the two groups for a long time. Azerbaijan won the war not because of superior troops, but as Shoebat.com and other sites noted, she made extensive use of drone strikes using drones given to her by Turkey. Thus, while the data indicated that Armenia seems to have had better overall fighters potentially, no man is a match for a killing robot in terms of consistency, accuracy, and lethality. This was what made the fundamental difference.

Azerbaijan has openly said that she and Turkey are very close, and Turkey has expressed, with Azerbaijan’s consent, eventually merging the two nations together as a part of a renewed Ottoman Empire in formation. While Russia immediately stepped into Armenia following the Azeri victory and potentially jeopardized any Turkish plans for self-expansion at the time, it certainly has not dissuaded the Ottoman juggernaut from continuing her plans for the future of a new Empire. As the Azeri News.AZ points out, Turkey and Azerbaijan recently has been part of a series of military exercises together.

Turkey’s Ministry of National Defense has released new video footage of the joint Winter Exercise 2021 that is going on in Kars.

During the regular stage of the exercises, the tasks were carried out with the involvement of tanks and howitzer-guns, the Azerbaijani Defense Ministry told AzVision.az.

The exercises will last until February 12.

It should be noted that the Winter Exercise 2021 is held with the participation of units of the Turkish Armed Forces and the Azerbaijani Combined Arms Army. (source)

But it should not be said that Turkey is alone. As she is practicing with Azerbaijan, she is also at the same tim, in the Black Sea, engaging in Naval exercises with the US warship USS Donald Cook as the Turkish Ministry of Defense tweeted. These exercises also included F-16 fighter jets.

The Turkish frigates TCG TURGUTREİS and TCG ORUÇREİS conducted a joint maritime exercise with the USS PORTER and USS DONALD COOK destroyers of the US Navy in the Black Sea.https://t.co/QvvrZ8suto pic.twitter.com/0fmGy8ZnNS

Two Turkish F-16 and one U.S. maritime patrol aircraft participated in the exercise conducted in the Black Sea. The exercise contributed to mutual interoperability by strengthening the cooperation between the naval forces components of the two countries.https://t.co/QvvrZ8suto pic.twitter.com/rdF9osv8mn

If one believes that the situation in Nagorno-Karabakh is over, one is gravely mistaken.

Shoebat.com has pointed that the US has been a formal national ally of Turkey since 1887 beginning with the diplomat Oscar Straus’s outreach to the then Ottoman Empire. Prior to that, the US often sold guns and other weapons to Turkey. If one wants proof of this, all one has to do is to go to the Wadsworth Atheneum (a history museum) in Harford, Connecticut, and one can see an entire display for Colt firearms (as the company is from Hartford) where one will find an ample collection of metals given by various Ottoman Sultans to Colt for their assistance in selling weapons to the Ottomans. Be aware also that many of these guns were later used to murder Christians, such as with the infamous Hamidian massacres of 1895 that were and historians consider to be predecessors to the Armenian Genocide.

Historically speaking, the US tends to side with Turkey in major conflicts. The same can be said about Germany, for while the US went to war against Germany in World War II, the fact that she immediately turned around after the war and not just helped rebuild Germany, but took the very National Socialist philosophy that she so condemned and started promoting it- with the direct help of the same National Socialists she was at war against -around the world says that the US did not care about the actual philosophy at all, but that it was a power contest and she wanted to so secure what she felt was her own place.

The same situation seems to be the case with Turkey, and even Japan. The US seems to think that she can “control” these nations like a “dog on a leash” and make them do what she wants, and thinks that she may have succeeded in that. However, these nations all have very long, violent, aggressive histories that are much deeper than the whole history of the US. Turkey is no fool, and she knows what is going on, and is playing along because she is being forced to lest she face potentially crippling subjugation. However, the same tendencies of the past are still present, and all it would take is for the US to lose control over her own domestic or aspects of her international situation for things to break down, as a wolf will always remain a wolf.

We know for a fact, for example, that the US has nuclear weapons stored at Incirlik AF in Turkey. If something were to happen to the US- and problems always do -it is not unreasonable to think that if Turkey believes she could get away with it, she would raid the base and steal the weapons, and may even use them against the US. One cannot predict what such a menacing nation like Turkey may do if given the opportunity.

Likewise, people may think that the events of Armenia a century ago may not happen again, but to think this is to be ignorant of history. Unlike the average American it seems, many people have long memories and do not forgive easily or at all. For Turkey, Armenia’s existence is a job left unfinished, and the extermination of the Armenian race a task yet to be completed. Turkey’s own actions suggest this, since following her assistance to Azerbaijan in taking Nagorno-Karabakh and now militarizing the Aras River area, Armenia is almost entirely isolated from all neighbors except Turkey or Turkey Azeri ally, and thus is a ‘nation within a nation’, surrounded and having no way to escape. All Turkey would have to do is to launch weapons, or just march in, and Armenia cannot survive.

Turkish militarism is back and for the future is here to stay. They may not carry spears or scimitars or dress in funny clothes, but they are no less deadly than in the past and arguably are deadlier now with western training and the assistance of nations such as the US and Germany who don’t care what Turkey does so long as it does not hurt their image for their stockholders and money changers.