You are here: Home › After Professional Sports Kicks It, Is Talk Radio Next? 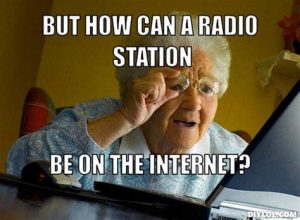 Professional sports will never fully go away. However, what does stay in the future will be greatly reduced as it is largely a “thing” of aging Boomers whose children are mostly not interested in so far as long-term trends are concerned, and is thus threatening a multi-billion dollar industry.

But there is another industry that also may go, along with professional sports, and that is the infamous “conservative” talk radio. I speak specifically of radio, not YouTube videos, Twitch/DLive streams, or other forms of online media, but the Rush Limbaugh/Sean Hannity/other random local person at a radio station, These talk radio shows are mostly Boomer driven and Boomer run, and as the Boomers become notes in a history book, as The Washington Post reports, the talk radio show may go with them.

Faced with aging and shrinking audiences, competition from newer technologies and financial problems for the biggest station owners, talk radio is in decline — both as a business and a political force. Once a leading platform for popularizing conservative candidates and policies, talk radio is on the verge of becoming background noise, drowned out by a cacophony of voices on podcasts, cable TV and social media.

Meanwhile, plain old AM-FM radio — the primary medium for talk programs — is rapidly losing ground to newer technologies such as satellite radio, streaming audio and podcasts. Only 50 percent of those surveyed by Edison Research last year listed terrestrial radio stations as their first listening choice in a car.

The shift makes someone like comedian Joe Rogan, a libertarian with a hugely popular podcast, “the next Rush Limbaugh,” says Paul Matzko, the author of “The Radio Right: How a Band of Broadcasters Took On the Federal Government and Built the Modern Conservative Movement.”

Conventional radio’s decline appears to have accelerated sharply during the pandemic. Daily commutes have been disrupted by stay-at-home orders and a new work-from-home culture, wiping out part of radio’s lucrative “drive-time” audience. It’s unclear whether those listeners will return after the pandemic subsides and traffic jams return.

Talk radio’s older demographics were a weakness even before the pandemic, said Jerry Del Colliano, a New York University business professor who publishes the Inside Music Media blog. Turned off by the hosts’ occasional nastiness and seeking young customers, many blue-chip companies have stopped advertising on talk-radio shows, leaving the stations with smaller sponsors who pay less, he said.

“Right-wing media is still a massive growth industry,” says Hemmer. “When Limbaugh’s show goes dark, it will be the end of an era. But it’s hard to imagine that too much will change: It will take a while for [new] outlets to gain the type of trust that Limbaugh has . . . but all in all, we’re living in a political culture Limbaugh helped create, and it’s likely it will continue to exist long after his show ends.” (source)

Talk radio- and the conservative movement at large -needs either to die or get a major overhaul, because the industry is fundamentally no different than the political left, and both serve the continuation and enforcement of the same policy goals, but with different emphases. The ascendant political left right now will eventually be challenged by a new, ‘right wing’ alternative equivalent, but different from the form of the past. As Shoebat.com has noted, the trend will likely be, assuming the current variables, a platform that is more diverse ethnically, far less religious, supports sodom, and will look more like what is by many standards as “liberalism”.

Also, something else that was noted, is that the radio station will not survive unless it becomes “local” again. This is an interesting observation, and an expansion of the “tribalism” that we have discussed taking place on a political level. Communities, regions, and even nations are ‘Balkanizing’, and this is part of a trend leading to war. Interestingly, for the radio model, it suggests that by serving a ‘hyper local’ market, it might be able to make itself relevant again, perhaps renewing itself as a sort of ‘town green ‘for local news and debates but also integrating regional or international trends. In other words, it would go back to being a source of real community news a hot-topic discussions on a per-community basis. That would be a way to replace some of the void left by newspaper.

But at the current time the radio is on its way out from the form that most are accustomed to, and with that, the major corporate profits that have been associated with it and the Boomer generation.