You are here: Home › MMT In Action As Us Budget Debts For 2021- Even Before BidenBux And KamalaKash -Hits $2.3 Trillion 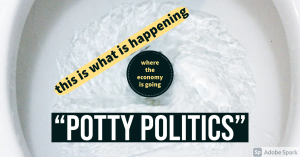 BidenBux and KamalaKash are my particular terms which I use to refer to the obscene levels of spending from the government on COVID impact payments, which arguably is just direct welfare in the form of an IRS rebate. This based off of something called MMT, or “Modern Monetary Theory”, and is summarized by the Reaganesque idea that ‘debts don’t matter’. Spending is the rule, debts are ignored, and it becomes run the credit card as hard as you can and then run it some more, and if that can’t happen, print the money to pay for it.

Of course MMT is just another fancy way of saying ‘print money’, and debts do matter. If they didn’t matter, why should anybody pay anything? From a Christian view, why did Christ have to come, since our sin debts would not be in need of being paid? It is an entirely false premise, but now this is the philosophical foundation which the US is operating on, and most likely it is because, as I have constantly said, the US dollar is collapsing, and the US is using her position as the world reserve currency and the nation in control of the world’s printing press to ‘print her way to prosperity’, which is not actual prosperity, but robbing value from responsible people who work hard and save money as well as from nations who do not control such a printing press. It is not a tool of building up, but robbing others while one’s own house is burning.

As of yesterday, it has been announced that a third stimulus check for $1400 per person has been approved in the House, and it is likely going to pass the Senate next week and be signed into law by President Biden. There is also talk of a monthly payout based on the number of children that one has that also seems as though it will pass and if so, will function as a UBI (universal basic income).

I have detailed the fiscal consequences of this before in the Shoebat archives, but to summarize, as I and many others have said, one cannot print one’s way to wealth, but one can certainly print oneself into currency devaluation and collapse. This is demonstrated many times by historical example.

That said, an article from CNBC reports that so far this year, and not even including the above payments for the third stimulus check, the debt for the US is already a $2.3 trillion dollars, or on track to become the largest deficit in history.

The federal budget deficit is projected to total $2.3 trillion in the 2021 fiscal year, a drop from last year but well ahead of anything the U.S. had seen prior to the Covid-19 pandemic, the Congressional Budget Office reported Thursday.

That total does not include the $1.9 trillion in relief spending that President Joe Biden has proposed, because the ultimate size of the package has not been determined.

While smaller than the $3.13 trillion shortfall in fiscal 2020, the red ink this year still will be the second-largest in the nation’s history either in total dollar terms or as a proportion of the $20.9 trillion U.S. economy.

The dollar size of the budget shortfall is $448 billion, or 25%, larger than the previous forecast from the CBO, a nonpartisan agency that provides budgetary analysis to Congress.

Not surprisingly, the CBO said the inflated level comes from the added spending that Congress has instituted to combat the effects of the pandemic. After pushing through the $2.2 trillion CARES Act in March, Congress in December approved $900 billion more in funding.

However, the report notes that the big deficits are somewhat offset by faster economic growth.

“Those deficits, which were already projected to be large by historical standards before the onset of the 2020–2021 coronavirus pandemic, have widened significantly as a result of the economic disruption caused by the pandemic and the enactment of legislation in response,” the CBO said in the report.

The deficits continue to push the national debt higher as well.

It appears that through a series of highly clever financial manipulations, the US is going to try and draw out the current situation for about a decade, but it will likely last a lot shorter of a time. In other words, given our projections from Shoebat.com, it appears to be an attempt to delay an actual fiscal reckoning with debt in order to happen in conjunction with a war so that the dollar can be “flushed” and a new dollar installed alongside domestic industrial production in order to restart the economy. It is, from the viewpoint of an amoral, scheming evil genius sort of approach, a rather logical, calculated, and methodical plan if it is able to work. It is not good, but certainly not without basis. The question is, can it work?

That is what is going to be seen in the coming years. Until that point, what is going to happen with these checks/UBI/other forms of payments, call them what one wants, is to destroy the value of money until it becomes worthless and the price of goods rises accordingly, which prompts the need for more stimulus, and repeats the same cycle until it cannot go on any longer.

In other words, the toilet has been flushed, and the US economy is circling around in the bowl before being dumped into the sewer. The smart man will note this trend and since he is unable to fight it, will “ride the wave” of the swirling water to gain momentum so that he can best “jump out of the bowl” before the “refuse” in it goes down the pipes.