You are here: Home › Democrat Show Trial Over, Trump Acquitted Of Impeachment 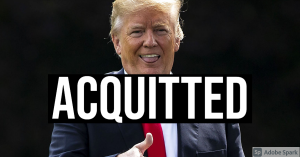 The political dog-and-pony show is over as according to CNET, Trump has been acquitted of impeachment charges.

The Senate has voted to acquit the former president of the United States after the second impeachment trial of Donald Trump concluded Saturday. The vote came after a five-day trial where arguments centered around whether Trump incited the attack on the Capitol on Jan. 6, and whether it is constitutional to hear the impeachment trial of a former president who is now a private citizen.

Despite a compelling prosecution, an acquittal isn’t unexpected. While the Senate is split 50/50, with Vice President Kamala Harris to cast a tie-break vote as president of the Senate when necessary, the impeachment trial required a two-thirds supermajority for conviction.

This meant 17 Republican senators would have had to vote to convict Trump, an unlikely ask from the beginning. This was indicated in a Jan. 25 vote led by Sen. Rand Paul on whether the impeachment trial of a former president was “unconstitutional,” during which just five Republicans voted against the motion. The first day of the impeachment trial this week then saw a similar vote, during which six Republicans voted with Democrats to continue the trial.

In the end, the vote was 57-43 to convict Trump, with all 48 Democrats, two independents and seven Republicans finding Trump guilty. The only members of the GOP who voted alongside the Democrat senators were Sens. Susan Collins, Mitt Romney, Lisa Murkowski, Ben Sasse, Pat Toomey, Bill Cassidy and Richard Burr.

How to watch: Impeachment trial vote: How to watch and stream Saturday

During the trial this week, prosecutors relied on disturbing video footage showing the Capitol riot, as well as video and audio clips and social media posts showing Trump repeatedly calling on supporters to march on the building on Jan. 6 and in the days and months leading up to that date. House impeachment managers additionally showed tweets where Trump lauded violent actions by his supporters in the lead-up to the 2020 election, continued stoking the violence during the insurrection and “did nothing to protect us.”

Trump’s defense team used more dispassionate constitutional and legal analysis to argue the trial is a violation of the former president’s First Amendment rights, as well as claiming Trump’s rally speech was taken out of context — and that Democrat leaders have used the same language in the past in calling on their own supporters to “fight.” (source)