You are here: Home › UK Hit With Worst Recession In Over Three Hundred Years

By Andrew Bieszad on February 14, 2021 in Featured, General 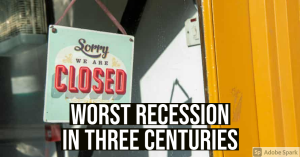 To understand the seriousness and the impact that the COVID-based closures are having on the economy, one can look well beyond the economic data in the US and abroad, but to history as well. According to CBS News, the UK is a particular example as the recession is the worst that the empire has experienced in three centuries, not since the Great Frost of 1709, which for the sake of historical comparison, was when the US was still a British colony, was before the partitioning of Poland, and the middle of the US was still a French territory.

The United Kingdom is facing its worst recession since The Great Frost of 1709 — back when the American colonies were still British, and Benjamin Franklin was just 3 years old.

Residents have been trading at Borough Market for at least 800 years. It’s still open, but now, on most days, it’s close to deserted.

Foster’s family has been selling fruit and vegetables in London for four generations, employing more than 50 people. But they’ve had to furlough half of them.

Foster said he doesn’t think the business could survive another year of this. “Another year, no, we wouldn’t be able to survive that long,” Foster said.

While the U.S. economy shrank by 3.5% last year, the U.K. economy contracted by nearly 10%, and economists believe it will take longer to recover.

In a wealthy part of Central London, near where fashionable boutiques and houses that sell for tens of millions of dollars are located, people receive groceries and meals at a food bank. Many of them said they used to be considered middle class.

“I never thought in my wildest dreams I’d ever come down here, having to come into a food bank. I used to give people money on the streets,” Jane Austin said.

Austin was a chef working in upscale venues before the pandemic hit. Now she said she has to choose between heating her apartment or buying food.

“I felt embarrassed, to be quite honest, I felt, this was one of my lowest points, like to come and ask for food,” Austin said.

“Ironically, this food bank is in one of the wealthiest areas of London,” Williams said.

“It’s ironic, it’s absolutely horrendous. I’ve paid taxes, and this is what I’m getting for my taxes. It’s just heartache and pain,” Austin replied.

Dr. Miatta Fahnbulleh, an economist, told CBS News the British government’s slow response to the pandemic, along with Brexit, created a perfect storm of economic pain.

“There are families that literally cannot feed their children. I think as we see more images of this, there will be a sense that you know our government are letting people down, and it is unacceptable,” Fahnbulleh said. (source)

As many have noted and which I continue to emphasize, the effects of COVID are far worse and will long outlast the pandemic itself. This is very serious and is not going to go away, and with each year, things will become more serious for the people, which causes economic problems, and in turn, leads to political destabilization, and possibly culminate in a war.

Democrat Show Trial Over, Trump Acquitted Of Impeachment
Eugenics Is Back As People With Learning Difficulties And COVID Given Involuntary DNRs
Follow