You are here: Home › Land Changes And The Future Of Cities 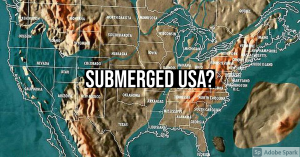 The “global warming” versus “global cooling” game is more political than based on actual science save for the fact that climates naturally change, going through hotter and colder periods. There is nothing political about the weather, save for what men make it. However, weather does impact politics, and changes can have consequences for the future.

According to PHYS, studying a century of data has shown that water levels are indeed rising, and not necessarily related to the political “global warming”, and may rise more in the years to come.

Projections of rising sea levels this century are on the money when tested against satellite and tide-gauge observations, scientists find.

Climate model projections of sea-level rises in the early 21st century are in good agreement with sea level data recorded in the corresponding period, a recent analysis has found.

And the scientists who crunched the numbers say the finding does not bode well for sea level impacts over coming decades if greenhouse gas emissions are not reined in.

In an article published recently in Nature Communications, the scientists from Chinese and Australian institutions including UNSW Sydney examined the global and regional sea level projections of two reports by the Intergovernmental Panel on Climate Change: the Fifth Assessment Report (AR5) and Special Report on the Ocean and Cryosphere in a Changing Climate (SROCC).

They compared the reports’ projections with the observed global and coastal sea level data gathered from satellites and a network of 177 tide-gauges from the start of the projections in 2007 up to to 2018. The scientists found that the trends of the AR5 and SROCC sea level projections under three different scenarios of greenhouse gas emissions “agree well with satellite and tide-gauge observations over the common period 2007–2018, within the 90 percent confidence level.”

Study co-author and leading sea-level expert, Professor John Church, says while he thought the projections from modelling would be accurate at the global level, he was pleasantly surprised that they were as accurate at the regional and local level. (source)

Again, I want to make very clear that I do not see this as a partisan issue, nor am I concerned about “the polar ice caps melting” or not. It does seem interesting to note- the story that is -because so many major cities saw serious changes over the last century, becoming urban megatropoli on land that is at or below sea level.

Weather changes, like it or not, and it effects people. Since natural changes can be exacerbated by man-mad events, or natural disasters, it is important to watch. One only needs to look at Hurricane Katrina, as decades of horrendous environmental policies plus urban mismanagement has resulted in New Orleans now sitting below sea level, and were it not for the continually rebuilt dykes and pumps that remove water, the old French city would sink to the bottom of Lake Ponchartrain.

This is not just a concern of scientists. The military has expressed concern for the safety of over a hundred bases because of this.

One may note too, such as in the image above, that these submerged areas seem to correspond to natural earthquake fault lines. As I have pointed out before, these and a few other natural phenomenae or characteristics are the greatest weakness of the US, more than any military power, and that military powers may try to exploit these natural conditions to their benefit.

It is interesting, and a trend to watch will be if something of this does indeed grow, or if it stops.

Eugenics Is Back As People With Learning Difficulties And COVID Given Involuntary DNRs
Report: Biden Pipeline Shutdown Will Spike Food Prices
Follow