You are here: Home › A Dozen Japanese Companies Cease Business With China Over Forced Uyghur Labor 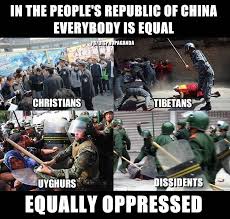 Right now, China is committing an attempted genocide against the Uyghur Turkic peoples in her western regions, mostly out of nationalistic ambitions. There are many stories of horrible abuse, including forced labor camps for Chinese businesses. In response, Kyodo News of Japan reports that a dozen Japanese companies are ceasing business relations with China due to the forced labor.

Pressure has been mounting on Japanese firms to take action over such human rights abuses in the supply chain after the United States and Britain imposed import restrictions on cotton and other products originating from the autonomous region.

The Japanese government, which has been criticized for being slow to impose similar sanctions, has been passive in addressing the issue due to fears of provoking China.

In a report last year, the Australian Strategic Policy Institute identified over 80 global companies “directly or indirectly benefiting from the use of Uyghur workers outside Xinjiang through abusive labor transfer programs.” Kyodo News recently asked 14 Japanese companies mentioned by the think tank how they plan to respond.

With the exception of Panasonic Corp., which declined to comment, all companies either denied directly doing business with companies suspected of benefiting from forced labor or said they could not verify the claims against their suppliers.

In terms of future policy, 12 companies responded that they would cease or consider ceasing business with business partners found to be using forced labor.

Toshiba Corp., which has a license contract with a firm suspected of using forced labor, said it could not confirm the claims but has decided to terminate business with them by the end of the year.

As many foreign companies rely on self-reporting of the human rights situation by the firms themselves, they are faced with the challenge of grasping the situation beyond direct business partners.

Ryohin Keikaku Co., the Muji-brand goods store chain operator, was among three Japanese companies found to have dealings with Chinese firms, or parent companies of those firms, currently under embargo by the U.S. government.

“All our cotton and yarn has been internationally certified organic by a third party,” it said.

The retailer had been selling various products with “Xinjiang cotton” as part of the product’s name on its official website, but they were removed following the Kyodo News investigation. (source)

There is a certain irony with Japan decrying forced labor, for while the concept is good, one only needs to remember that during the early 20th century, Japan invaded China and forced Chinese to perform slave labor and other horrible things, including forced prostitution, all the way to horrible things such as the infamous Unit 731 under General Ishii that did human experimentation, and sometimes just mass murder of Chinese. One can recall the “Rape of Nanking”, where Japanese soldiers went on a rape and murder spree that is one of the worst in recent history.

However, as with many things, this ‘humanitarian’ action is certainly politics. Japan doesn’t like China, she understandably fears a Chinese rise, and China would absolutely abuse Japan, Japan knows, this, and as she historically is able to overtake China, she is planning for a repeat of another military action against her, with US and foreign, most likely English and French, assistance.

It is harder with China, because of their size and the wide variety of products which they produce, but using the US dollar and food supplies coupled with in particular tech industry diversification to nations in southeast Asia and India, the US, Japan, and their allies seem to be pursuing a slow strategy of the same used against Russia, which is to isolate them economically and socially as much as possible from the rest of the world before going to war against them. Because of the large trade deficit with the US and the debt of the US, the US seems to be looking to continue to widen said deficit at the same time she detonates her own currency’s power in order to have the dual effect of “paying back” China’s debts in worthless dollars while at the same time blaming China for “destroying the currency” and thus call it an act of war so that she can clear her debt and wage war against her. This is the reason for so much emphasis on China as a “currency manipulator”, and it will be a trend for one to hear more of this in the future, since the US wants to use her economic problems as a weapon against China while evading her debt obligations and in the process robbing China while making her a scapegoat.

China is a large, strong nation, but she has very few allies and many nations do not like or trust her. At the same time, China’s attitude does not help this, since she can neither lie nor bluff, but just appears to be angry and somewhat unbalanced. She tends to abuse her own minority peoples- such as the Uyghurs -instead of allying with them. For in spite of all the “nationalism” the governments promote, the Americans are as aggressive about building coalitions between the Black and critical Hispanic minorities with the Whites as the English are with the Pakistani and Indian minorities, the French with the sub-Saharan colonial Africans, the Germans with the Turk minority, and Russia with her many Turkic or Turco-Aryan races that inhabit Siberia. China, to the contrary, makes no secret of her attempts to ethnically cleanse her minorities, and then baldface tries to deny it before the world.

Japan doesn’t like China, and in her mind, and the minds of many, Nanking was a job left unfinished.

Watch for more Japanese economic divestment from China, especially using the Chinese abuse of the Uyghurs, and with that further justifications for a harder anti-China stance from Japan, the US, and much of the world.