You are here: Home › We Told You At Shoebat.com It Was Coming, New Study Finds That One In Six Zoomers Is A Sodomite 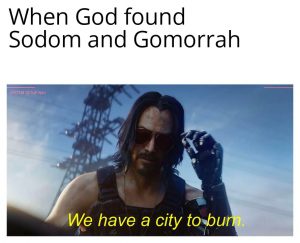 One of the most hotly contested bloc of articles for Shoebat.com over the years has been our reporting on the sins of the Sodomites. There are many people who say that holding to divine revelation as articulated through Sacred Scripture and Sacred Tradition is a form of being “mean” or “hateful”, but the fact is that it is not either- it simply is following the words that one is required to speak when one becomes Catholic, which is, “I believe and profess all that the Catholic Church believes, teaches, and proclaims to be revealed by God.” Even for other Christians in different sects that lack the fullness of the Faith or even heretics in some cases, given that they are but incomplete or incorrect adjustments to the same original Church established as per St. Matthew’s Gospel on St. Peter and against which the gates of hell will not prevail, will reflect this teaching at times and generally have frequently done so throughout much of history because it is explicitly clear even for those who wish or rather would prefer to deny its existence.

One may take issue with our particular approach over the years, yet how many others in our particular style do such to stress the absolute evangelical emergency that such a group poses? If one believes in the teachings of the Church, this sin is enough to rain down the wrath of God on a people as a sign for all time. Would a man look at another in a burning building say “Well, he said that he enjoys his apartment, and he does not care and does not want to leave, so it is not my place to do something”, or is it better to at least try to tell him and others that they need to leave now and to do so in a voice that gets attention and is backed by both moral principle (religious reasoning in our case) and tangible evidence (such as scientific studies, crime statistics, medical reports, articles from the news, etc.)?

One cannot force another man absolutely to listen. However, one can do what one is able to do with what one has.

We have warned for a while that the sin of Sodom is consuming the US, and that sodomite behavior has been on the rise. A study in California several years ago found that 25% of Zoomers identify as sodomites in the state, and another found that up to 30% of all Zoomer women are the same. Keep in mind that sodomite includes all letters in the term LGBT, so a lot of these people would be classified in the “B” category, as they are declaring an attraction to both men and women.

Now another study reported on from the San Francisco Gate that a survey from Gallup has found that one in six Zoomers, or about seventeen percent, identify as sodomites.

One in six adults in Generation Z identifies as LGBT, according to survey data released early Wednesday from Gallup, providing some of the most detailed and up-to-date estimates yet on the size and makeup of the nation’s LGBT population.

Gallup’s latest survey data, based on more than 15,000 interviews conducted throughout 2020 with Americans aged 18 and older, found that 5.6% of U.S. adults identify as lesbian, gay, bisexual or transgender, up from 4.5% in Gallup’s findings based on 2017 data.

At a time when the majority of Americans support gay rights, more than half a decade after the Supreme Court legalized same-sex marriage, it’s clear that a growing percentage of the U.S. population identifies as LGBT, Gallup’s researchers said. What’s less clear is why. Is it because of a real shift in sexual orientation and gender identity? Or is it because of a greater willingness among young people to identify as LGBT?

If the latter is true, it’s possible the latest findings are undercounting the actual size of the population, Gallup said. Moreover, the 2020 survey data only captures the oldest segment of Generation Z, those ages 18 to 23.

Phillip Hammack, a psychology professor and director of the Sexual and Gender Diversity Laboratory at the University of California, Santa Cruz, said the Gallup findings are “extremely exciting,” and are consistent with his own research about young people identifying as LGBT in California.

A key reason for this growth is the internet, he said. When Hammack was coming out in the 1990s, there was no YouTube, no Instagram, no easy way to research sexuality or gender outside of a library or a Gay-Straight Alliance group. Today’s teenagers have all this information at their fingertips.

“The rigid lines around gender and sexuality are just opening up for everybody,” Hammack said. “Young people are just doing it. … They’re leading this revolution, and they’re forcing scientists to take a closer look.” (source)

This is a huge development. The other two studies were produced from smaller groups. This is a Gallup poll, which is a lot larger and generally speaking, considered to be ‘more serious’, and they are reporting these high numbers.

Of all the generations in American history so far, it is clear that Generation Z is Generation Sodom.

I’m not saying that other generations are innocent. Millennials are, like the Boomers are in their relation to Generation X, the precursor to what is arguably their extension of but not exactly the same as the Zoomers. That is to say, they share a sociocultural and historical continuum which links the two groups closer than say, Boomers and Millennials. A lot of this sodomy first appeared with the Millennials.

In addition to this, the Boomers and Generation X raised most of the Millennials and Zoomers. One has to ask what happened to enable such a rise in these practices, as the parents are often important in seeing how one’s compass for beliefs is or is not aligned.

There are a lot of consequences from this study we can say, but the trends to look for can be summarized as follows:

-Sodom will get more popular, and its support will be enshrined into law, compliance will be expected and viciously enforced, and those who oppose it will be actively and legally discriminated against. Look for imprisonment, fines, and other forms of legal sanction brought against critics.
-Christianity is going to continue to decline, and those Churches who do not pay lip service to the LGBT will face possible closure, censure, and even seizure by authorities.
-Christian beliefs, even if there are almost no Christians left, will be ruthlessly mocked because stomping on the ‘dead corpse’ of the Christian past will be seen as a way of justifying further promotion of sodom.
-Pedophilia will be redefined and eventually legalized, most likely starting with teenagers and expanding the ‘age gap’ for consent until possibly as far down as three to five years of age.
-Nations who oppose this will find themselves political targets for “democracy promotion” by the US.

The US is not “turning into Sodom”. She is Sodom and far more than what Sodom ever was or would have been in her time, for there is not a difference in the nature of what either that ancient city practiced, believed, or would have done if she could, but that the US has simply taken the same of the ancient world and, using modern technology, logistical systems, and tools, brought the same result in a fuller and closer way to its natural philosophical end.

If God destroyed Sodom for merely embarking on and refusing to deviate from that path, what is to be said of the future of the US, who is not only further along the same path, but has been using her intellectual, financial, and military muscle to consent to and if not, forcibly drag people along the same road against their consent, and for the whole word?

Is it any wonder that the Church-approved revelations of Our Lady of Akita, which for those who claim to have seen the full text of the Third Secret of Fatima say that it is the same but Fatima is more severe, that the world may face a second Deluge like that in the time of Noah, except instead of water from Heaven, it will be by fire from Heaven?

God said that He would never destroy the world again by flood. This is the promise of the rainbow, something which the sodomites blaspheme and mock by appropriation of the symbol.

Western Countries Now Repeatedly Sending Ships Into South China Sea
Man Murders His Neighbor, Cuts Her Heart Out And Cooks It With Potatoes, Says He Did It To “Release The Demons”
Follow