You are here: Home › Will A Global Internet Tax Be Implemented? 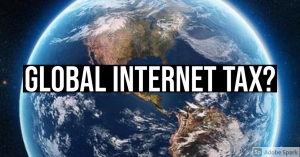 It is said that only death and taxes are two assured things in life. While death is unavoidable, taxes are sometimes so, as taxation precedes political control in a historical sense. It is with interest then that according to AFP and reported on by Yahoo! News, the US has dropped opposition to a key procedure that could pave the way for a global Internet tax.

US Treasury Secretary Janet Yellen told her G20 colleagues Friday that Washington is dropping a push for a controversial provision in a global digital tax, opening the door to a likely agreement.

The US shift — part of a broader repositioning by President Joe Biden from the “America First” agenda of former President Donald Trump — prompted immediate praise from Germany and France, which said a deal was now “within reach” following the US pivot.

Yellen announced at the G20 finance ministers meeting that US officials “will engage robustly” in the talks and “is no longer advocating for ‘safe harbor’ implementation of Pillar 1,” a Treasury official told AFP.

The Trump administration had insisted on a so-called safe harbor clause in the OECD tax that effectively would have allowed big tech companies to comply voluntarily, blocking progress on a deal.

The Organization for Economic Cooperation and Development has been working on a multilateral agreement that would include a global minimum corporate tax rate on tech giants.

The aim is to find a common solution to address the policy dilemma of how to tax profits earned in one country by a company headquartered in another that offers more favorable tax treatment.

European officials said the US shift was an important breakthrough.

“This is a giant step forward on our path towards an agreement among the participating states by the summer,” German Finance Minister Olaf Scholz said in a statement following virtual talks with his G20 counterparts.

French Economy Minister Bruno Le Maire said a deal should be reached by summer, calling for negotiations to be “concluded without delay.”

France in 2019 approved a tax on tech firms like Facebook, Amazon, Apple and Google, which were accused of moving their profits offshore.

Paris suspended collection of the digital services tax through the end of 2020 amid the OECD talks.

But the measure had drawn sharp criticism from the Trump administration, which had planned to enact tariffs on French goods, but called off the levies in early January before leaving Washington.

Yellen had signaled the likely US shift during her January Senate confirmation hearing, saying she supported efforts to ensure corporations pay their “fair share” and to remove incentives for companies to offshore activities. (source)

The danger of any “global Internet tax” is that is comes necessarily at the cessation of some level of political control, for one has to handle and administer the finances collected, and he who controls the money makes the rules. It is a variant of the “golden rule”, except this is, he who has possession of the “gold” is the one who makes the rules.

The reason for this has nothing to do with “fairness”, because it is an attempt to squeeze profits- for no reason other than greed and power -from one area into another who has more restrictions and in theory could extract more tax dollars from it. The governments do not care, even if it comes at the cost of destroying the system itself, which for the Internet would be the purpose of free and open interchange for ideas and replacing it with a system that enforces a rigid power establishment not different than those which existed in previous times but having the Internet, with greater tools than ever before to realize more effectively the same ends.

In other words, the idea of a “brave” and new world is not just a literary concept, but a more tangible possibility with the practical tools to realize it.

Study: Most Zoomers Believe In Moral Relativism
The Trump False Prophets Scatter To The Winds
Follow