You are here: Home › Election 2020 Is Now About Two Old Geezers Arguing Over Who Is More Senile 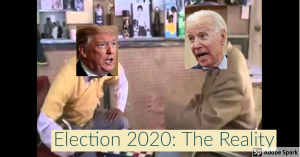 2020 so far has the COVID-19 coronavirus, massive spending and payouts, economic collapse, another wave of migrants to Europe, Chinese gold monetary bar scandals, Russia trying to revive the USSR, Germany and Japan rising, murder hornets, Black Lives Matter, race riots, and just general chaos with talk of a second pandemic incoming. Now one would think that such things would stir people to concern or action. But no, for as Axios reports, the 2020 presidential election is not about issues, but two old geezers who, no joke, are arguing over who is more senile.

Senility is becoming an overt line of attack for the first time in a modern U.S. presidential campaign.

Why it matters: As Americans live longer and work later into life and there’s more awareness about the science of aging, we’re also seeing politicians test the boundaries of electability. Biden is 77; Trump, now 74, already is the oldest person to assume the U.S. presidency.

Driving the news: As President Trump ramps up insinuations that his general election rival is doddering, Joe Biden turned the tables on Tuesday, saying Trump “doesn’t seem to be cognitively aware of what’s going on” with his own briefings about Russia and U.S. service members.

At the same news conference where he took a swipe at Trump, Biden was asked by a reporter if he has been tested for cognitive decline.

A Trump campaign Twitter feed played back the clip and asked, “Did Biden take a cognitive test? What were the results? Why is he getting frequently tested?”

Biden campaign advisers tell Axios’ Alexi McCammond and Hans Nichols that the testing Biden was talking about is the past 15 months on the campaign trail and that they see Trump’s attacks, in psychological terms, as “projection.” They also said Biden wasn’t previewing a new theme, just highlighting Trump’s attempt to distract from his own vulnerabilities.

Flashback: Candidates’ age and mental state have been questioned in past presidential campaigns — remember Barry Goldwater in ’64, Ronald Reagan in ’84 and Bob Dole in ’96 — but never like this.

The big picture: Cognitive decline is a problem many older Americans deal with and a legitimate question for presidential candidates to be asked — and answer — says historian Julian Zelizer.

“We have a race right now where we have two old candidates, that’s just empirically true,” he says.

“I think this presidency has shown us that somebody’s mental state really matters.”

“With each of these candidates, the question has been raised — Trump because of everything he’s said and done” and remarks that often are “just a mishmash of words.”

“Biden, there’s questions, more subtle I think, about he doesn’t finish every sentence, or during the debates he’d pause and seem to have trouble thinking about what he wants to say. Those are the moments that then become questions.”

Between the lines: Both men’s durability as public figures also invites easy comparisons of them now with their younger selves, Zelizer says. (source)

Welcome to America in 2020, where issues don’t matter, and old people pointing fingers at each other is what gets attention. This is the state of the nation- Rome is (for the most part metaphorically) on fire, and the would-be-emperors are arguing about non-issues in public like at a carnival.

What we have are two brain-dead candidates- one in office who has not done anything and instead has wasted a historical opportunity to make right some difficult things but did not, and the other who is clearly senile and showing cognitive decline. Frankly, at this point, they are not the candidates I want, but they are the candidates that we deserve because for all of the years of supporting the sins that cry to Heaven for vengeance and not caring, eventually things catch up with time, and this may be what is, albeit slowly, happening.

Swedish Elderly Care Centers Are Deliberately Not Sending Elderly People With COVID-19 To The Hospitals. Instead They Are Letting Them Die Or Injecting Them With Chemicals That Kill Them
Jeffrey Epstein’s Partner-In-Crime Ghislaine Maxwell Arrested By FBI
Follow