You are here: Home › Swedish Elderly Care Centers Are Deliberately Not Sending Elderly People With COVID-19 To The Hospitals. Instead They Are Letting Them Die Or Injecting Them With Chemicals That Kill Them

By Shoebat on July 1, 2020 in Featured, General, Highlight 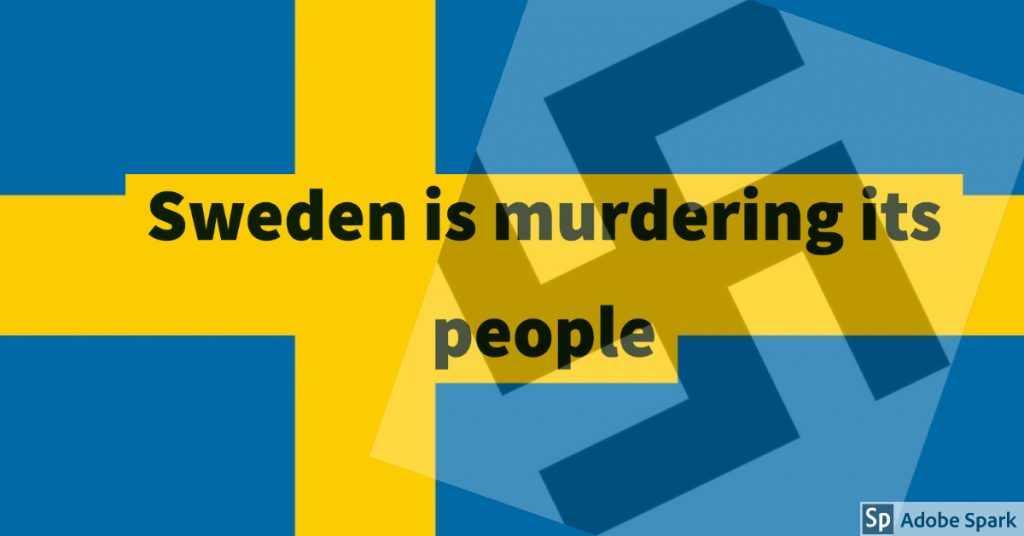 Let us not spare the widow

or regard the gray hairs of the aged.

But let our might be our law of right,

for what is weak proves itself to be useless. (Wisdom 2:11:)

An 81-year-old man by the name of Jan Andersson got infected with coronavirus while living in a nursing home in the Swedish town of Marsta. A doctor ordered by phone for the elderly care center to give Andersson morphine (breathing restrictor) as opposed to helping him recover from the virus. His son, Thomas Anderson, was told by the consulting physician on the phone that his father was too frail to be given medical attention. This was an obvious contradiction, since his father was well enough to have stomach surgery in March. The physician then told Thomas that his father only had some hours to live. Jan asked to visit him, but a nurse then informed him that his father was given a dose of morphine. He visited his father and found him in a horribly debilitated state from the morphine. “He was so much under the influence of morphine that I could not talk to him at all,” Thomas said in a telephone interview. “He was totally gone. So I could not even say goodbye.”

Thomas was infuriated. He left the hospital, only to return with a television film crew in order to put pressure on the elderly care center to give his father the medical care he so desperately needed. The elderly care center acquiesced, Jan was given care, and he recovered. “They said that my dad should not go to a hospital because he wouldn’t make it,” Thomas Andersson said. “They were wrong.”

What the Anderssons went through was not an anomaly or the result of some mistake or corruption, but was the direct result of the Swedish medical system itself. The story of the Anderssons caused a public outcry which resounded enough that people — mainly family members of patients and some doctors and nurses — have come out and joined in the protest. Numerous reports began to come out “concerning patients who were not admitted to intensive care on unclear grounds,” a spokesman for Sweden’s Health and Social Care Inspectorate said. These reports, according to the Wall Street Journal, “prompted national health-care authorities to start an investigation into the treatment of older patients in nursing homes and Stockholm hospitals.” What has been found out regarding Sweden’s policy towards covid victims is quite disturbing. For example, the Wall Street Journal obtained an email by the manager of an elderly care center, specifically ordering nurses not to transfer residents infected with covid to hospitals. When the Wall Street Journal reached out to the manager, the manager — typical of those like this — was silent.

This policy of either letting the elderly die or injecting them with drugs that directly kill them is contrary to what the Swedish government said back in March when covid first erupted as a major national emergency. On March 13th, the Public Health Agency of Sweden announced that the country was entering a “new phase” that required the prevention of the spread of the infection within the health care and the elderly care.” But this was not done. By the middle of April, it was reported that one-third of the approximately 1,300 who died from covid had been living in elderly care centers.  They are not just leaving elderly people to die in nursing homes, but are having them injected with morphine, midazolam and haldol, which are dangerous impediments to the respiratory system. “Older people are routinely being given morphine and midazolam, which are respiratory-inhibiting,” said Yngve Gustafsson, a geriatrics specialist at Umeå University, to the Svenska Dagbladet newspaper. In an interview with the  Aftonbladet Daily, Gustafsson said:

“In elderly homes, in principle, only palliative care has been prescribed, which means that you get morphine, midazolam and haldol to prevent being nauseated and vomited by morphine. It is a treatment that almost 100 percent certainly leads to death. Giving both midazolam and morphine inhibits breathing. If you have trouble breathing, you quickly get such an oxygen deficiency that you die.”

Gustafsson emphatically declared that what is happening in Sweden is euthanasia:

“Yes, I could almost imagine using even stronger words. That it is about the same as these people being killed. It’s basically a hundred percent way, much like the electric chair. It is about as effective.”

Gustafsson is not the only professor who is calling what is occurring in Sweden euthanasia. Shahidul Islam, Associate Professor at the Department of Clinical Research and Education at the Southern Hospital, Karolinska Institutet, and chief physician of internal medicine in Uppsala Academic Hospital, recently wrote:

“Giving morphine plus midazolam to a severely ill covid patient who has acute dyspnea and respiratory failure is incompatible with science or proven experience. The purpose of palliative care is to relieve the symptoms, but one must not relieve the patient’s symptoms by causing her death. Giving euthanasia is criminal even if it is done by compassion.”

One nurse,  Latifa Löfvenberg, who worked for a company providing medical services to various nursing homes north of Stockholm, recounted: “People suffocated, it was horrible to watch. One patient asked me what I was giving him when I gave him the morphine injection, and I lied to him,” said Ms. Löfvenberg, who is now working at a hospital in the Swedish capital. “Many died before their time. It was very, very difficult.” Lofvenberg also recounted how nurses were ordered specifically not to send those infected with covid to the hospitals — even if they were in their sixties and had a chance of recovering:

“They told us that we shouldn’t send anyone to the hospital, even if they may be 65 and have many years to live. We were told not to send them in … Some can have a lot of years left to live with loved ones, but they don’t have the chance… because they never make it to the hospital … They suffocate to death. And it’s a lot of panic and it’s very hard to just stand by and watch.”

There is another story that was reported by the BBC in which a man in Sweden, infected with covid, was injected with morphine and left to die before his daughter could last see him:

“Lili Sedghi’s father, Reza, was not seen by a doctor on the day he died from coronavirus, at his care home in northern Stockholm.

A nurse told her he’d had a morphine shot in the hours before he passed away, but he was not given oxygen, nor did staff call an ambulance. “No-one was there and he died alone,” says Ms Sedghi. “It’s so unfair.”

Sweden’t Prime Minister, Stefan Lofven, admitted: “We did not manage to protect the most vulnerable people, the most elderly, despite our best intentions”. There is a deliberate killing of the elderly, since young people are the ones getting most of the medical attention. As Lofvenberg recounts: “We don’t have many older people. It’s a lot of younger people born in the 90s, 80s, 70s.”

Killing the elderly, but only helping the young, is right within the Darwinist paradigm: helping those who are seen as contributors while killing those seen as useless. For to the wicked, “what is weak proves itself to be useless.” (Wisdom 2:11) What we are seeing in Sweden is a foreshadower of things to come: Darwinism, eugenics and massacres in the name of science and medical knowledge.