You are here: Home › Fed Declares That A Second Wave Of COVID-19 Will Devastate The Economy 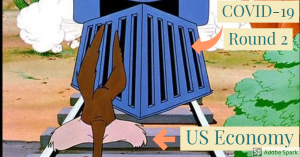 The Hill reports that, in the words of the Federal Reserve Bank, a second wave of COVID-19 will cause serious economic problems that will plunge the country further into a recession than what it already is in.

Federal Reserve officials expressed fears in a meeting last month that a second wave of the novel coronavirus could send a reeling U.S. economy deeper into an unprecedented recession, according to minutes released by the central bank Wednesday.

During the June 9-10 meeting of the Fed’s policymaking Federal Open Market Committee (FOMC), which came weeks before record spikes of the virus in states including Florida, Arizona and Texas, economists warned that resurgence of COVID-19 cases could decimate economic growth, spike unemployment and sap inflation far beyond the staggering levels seen earlier this year.

Fed officials also fretted that the ongoing loosening of restrictions imposed to slow the spread of COVID-19 would “contribute to a significant increase of infections” as policymakers face a “great deal of uncertainty” driven by the faltering U.S. response to the pandemic.

“Participants judged that the effects of the coronavirus outbreak and the ongoing public health crisis will weigh heavily on economic activity, employment, and inflation in the near term and would pose considerable risks to the economic outlook over the medium term,” the minutes read.

The minutes from June’s FOMC meeting is the latest glimpse into the Fed’s cautious approach toward a budding but increasingly fragile economic recovery.

The U.S. added 2.5 million jobs in May and saw a resurgence of consumer spending as states gradually eased social distancing orders and businesses closures. But the reopening of businesses without sufficient virus prevention efforts may have laid the groundwork for June’s sharp rise in coronavirus cases throughout the South and Sun Belt.

Fed officials voiced concerns earlier this month that May’s rebound may not have marked the nadir of the recession given the looming threat of a second wave. Officials argued that “a sustained reopening of the economy” depended on effectively curbing the pandemic and worried about the consequences of doing so without the virus under control.

“While this bounce-back in economic activity is welcome, it also presents new challenges — notably, the need to keep the virus in check,” Powell said. (source)

The second wave of COVID-19 has not hit yet either. As per the models, it will likely happen sometime between September and November. But whenever it does happen, it is going to be economically devastating for an already eviscerated economy.

The fundamentals are present and have been for a long time. The US economy, one could say, formally crashed in 2007/2008 and never recovered, with the “recovery” that happened being a fraud that was covered by money printing using the dollar as the world’s reserve currency to offset the mountain of bad debts in order to prevent the inevitable from being disclosed.

There is NO RECOVERY COMING. This cannot be said clearly enough. There will be NO RECOVERY until the debt issue is addressed, and at the rate at which the US is going, this will only happen by force one enough money is printed to services debt and the value of the currency is driven into worthlessness.

Therefore a second wave of COVID-19 will not actually destroy the economy, but continue the painful but necessary process of pulling the bandage off of the infection that is killing the economic body of the nation, and in exposing the problems will cause further problems.

Almost half of the current working population in the US is out of work, and those numbers are getting worse.

One cannot stop what is happening. However, one can prepare for what is coming so one can best get through it.