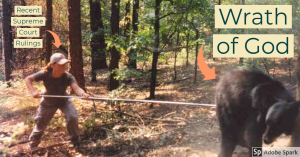 In a huge loss to the ‘pro-life’ movement, a recent Supreme Court ruling strikes down a law regulating abortion clinics in Louisiana as the AP reports.

A divided Supreme Court on Monday struck down a Louisiana law regulating abortion clinics, reasserting a commitment to abortion rights over fierce opposition from dissenting conservative justices in the first big abortion case of the Trump era.

Chief Justice John Roberts and his four more liberal colleagues ruled that a law that requires doctors who perform abortions must have admitting privileges at nearby hospitals violates abortion rights the court first announced in the landmark Roe v. Wade decision in 1973.

The outcome is far from the last word on the decades-long fight over abortion with dozens of state-imposed restrictions winding their way through the courts. But the decision was a surprising defeat for abortion opponents, who thought that a new conservative majority with two of President Donald Trump’s appointees on board would start chipping away at abortion access.

The key vote belonged to Roberts, who had always voted against abortion rights before, including in a 2016 case in which the court struck down a Texas law that was virtually identical to the one in Louisiana.

The chief justice explained that he continues to think the Texas case was wrongly decided, but believes it’s important for the court to stand by its prior decisions.

“The result in this case is controlled by our decision four years ago invalidating a nearly identical Texas law,” Roberts wrote. He did not join the opinion written by Justice Stephen Breyer for the other liberals in Monday’s decision, and his position left abortion-rights supporters more relieved than elated.

The case was t he third in two weeks in which Roberts, a George W. Bush appointee, joined the court’s liberals in the majority. One of the earlier decisions preserved the legal protections and work authorization for 650,000 immigrants who were brought to the U.S. as children. The other extended federal employment-discrimination protections to LGBT Americans, a decision that Justice Neil Gorsuch also joined and wrote.

In dissent on Monday, Justice Clarence Thomas wrote, “Today a majority of the Court perpetuates its ill-founded abortion jurisprudence by enjoining a perfectly legitimate state law and doing so without jurisdiction.”

Trump’s two high-court picks, Gorsuch and Brett Kavanaugh, were in dissent, along with Samuel Alito. The presence of the new justices is what had fueled hopes among abortion opponents, and fears on the other side, that the Supreme Court would be more likely to uphold restrictions. (source)

The split on this vote, like the split with the recent rulings in support of LGB and then T ties to the 1964 Civil Rights Act, was made by the “Catholic” justice John Roberts.

While there is speculation about Roberts’ voting patterns that may be tied to questionable adoption practices for his children, the fact is that this recent ruling basically sets back the “pro-life” movement to the state it was decades ago.

There is much to be criticized about in the movement, as Shoebat.com has noted. But what is of major importance is that abortion is inseparable from eugenics, and as we have noted, there seems to be an overlap between biotechnological experiments being conducted by DARPA for military research and abortion, with the latter being the source of “raw experimental materials” for the disturbing practices happening with the former.

People say “God bless America”, but at this point, it is “God please have mercy on the few Americans who try to fight and stop this stuff or who really do not understand the gravity of this,” because at this point, from a Christian perspective, it is difficult to see how the US will not be severely judged for her conduct in the willful murder of the innocent, let alone the other sins that “cry to heaven for vengeance”, and to that, is there not any more manifest a sign of God’s wrath than Him withdrawing His grace and allowing for the human race to go to war with itself?

350 People Attend Wedding. The Groom Is Now Dead From Coronavirus And Now 100 People Have Been Diagnosed With Covid-19
Fed Declares That A Second Wave Of COVID-19 Will Devastate The Economy
Follow