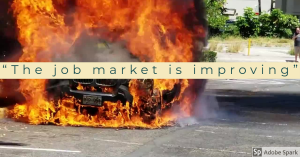 Right now, there is a lot of talk from Trump’s dwindling acolytes about how many improvements have been done to unemployment numbers. However, the fact is that these ‘numbers’ are meaningless because they do not indicate the quality of the work as it concerns pay, if the work in question will be long term, and if one will be able to stay in such a position for the long term. Sure, there are lots of jobs for working at a fast food restaurant, but since it has been mathematically proven that no job which pays less than a minimum of $17.07 in the lowest case, it is very, very hard to afford an apartment without causing extreme financial imbalances in one’s life if one is making $7.25 (federal minimum wage), $10, $12, or even now $15 per hour.

Thus it is with interesting that Zero Hedge reports in addition to the current job number ‘increases’, the number of ‘permanent’ job losses has sharply increased.

And one red flag: according to the BLS, the number of permanent job losers continued to rise, increasing by 588,000 to 2.9 million in June. The number of unemployed reentrants to the labor force rose by 711,000 to 2.4 million.

Also in June, the number of unemployed persons who were jobless less than 5 weeks declined by 1.0 million to 2.8 million. Unemployed persons who were jobless 5 to 14 weeks numbered 11.5 million, down by 3.3 million over the month, and accounted for 65.2 percent of the unemployed. By contrast, the number of persons jobless 15 to 26 weeks and the long-term unemployed (those jobless for 27 weeks or more) saw over-the-month increases (+825,000 to 1.9 million and +227,000 to 1.4 million, respectively). (source)

Permanent job loss means permanent. These jobs aren’t coming back, and good luck finding one’s way in the ‘new normal’ with a situation like this.

It is a very ‘hard pill’ to swallow, but life is fundamentally changing in the US, and it is going to get a lot harder for a lot of people.

If a man is wise, he will work right now on paying down his debts and economically preparing himself to weather what is going to be a fiscal winterthat will last for a very long time. The country is getting poorer, jobs are becoming a LOT harder to find, and the time to get new skills and work hard is right now before it is too late and even more serious poverty comes. Savings, while a useful tool, will also likely not help you because savings are related to the dollar, and the fundamental problem is that the value of the dollar itself is in decline, so the price of goods will be forced to rise- not because they are worth more, but because the same amount of money buys less.

What we are seeing is the active economic stratification of the country to a point where the US is starting to look like the USSR.

Massacre In Mexico As Sicarios Murder Twenty-Four Innocent People At Drug Rehab Clinic
More Than 50% Of All Covid Cases In The US Come From Texas, Arizona, Florida And California
Follow