You are here: Home › Russian Orthodox Monk Defrocked For Denying COVID-19, But Is That All There Is? 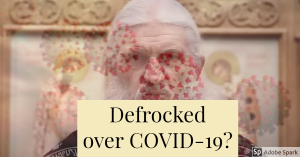 The Associated Press reports on an interesting story from Russia, where a Russian Orthodox monk is being defrocked for reasons among which are defying Russian Orthodox Church authorities about the COVID-19 coronavirus.

The Russian Orthodox Church on Friday defrocked a coronavirus-denying monk who has defied Kremlin lockdown orders and taken control of a monastery.

A church panel in the Ural Mountains city of Yekaterinburg ruled to defrock Father Sergiy, who has attracted nationwide attention by urging believers to disobey church leadership and defy church closures during the pandemic.

The monk didn’t show up at the session and dismissed the verdict. In a video posted by one of his supporters, he urged his backers to come to defend the Sredneuralsk women’s monastery where he has holed up since last month.

The church banned the monk from ministry in May, but he has continued preaching and last month took charge of the monastery outside Yekaterinburg that he had founded years ago. Scores of volunteers, including battle-hardened veterans of the separatist conflict in eastern Ukraine, helped enforce his rules, while the prioress and several nuns have left.

Father Sergiy has declared the coronavirus pandemic non-existent and denounced electronic passes introduced in Moscow and some other regions to stem the outbreak as “Satan’s electronic camp.” The monk has described the vaccines being developed against COVID-19 as part of a global plot to control the masses via chips.

He also urged believers to disobey the closure of churches during the nationwide lockdown. Orthodox churches across Russia were closed to parishioners on April 13 amid a quick rise in COVID-19 cases and were allowed to reopen in early June as authorities eased restrictions.

Speaking last month in a video from his monastic cell where icons and images of Orthodox Church hierarchs of the past adorn the wall alongside pictures of Russia’s last Czar, Nicholas II, and Soviet dictator Josef Stalin, Father Sergiy warned church officials that they will need to seize the monastery by force to get him out. (source)

Note the sections I highlighted in bold, because something else is going on here, but there are three main points that one can come away with.

First, is that the COVID-19 denial, while real, seems to be a tangential issue, as denying the existence of a virus pandemic or even disobedience from church authorities is rarely a cover for defrocking in any case. Sure, it can cause a fight and censure, but not being stripped of one’s ecclesiastical title. That is very rare thing, and suggests it is but a cover for a larger conflict.

Second, and a more important note, is how he had volunteers that are essentially government paramilitaries guarding his ‘monastery’. Who were these paramilitaries, and were they with the Russian government, or operatives and individuals who had ‘gone rogue’? We don’t know, but given how the Russian Orthodox Church has historically been subjugated to the Russian government and it has been absolutely so for at least the past fifty years where the line between the ROC and KGB is virtually indistinguishable, are we looking at here this monk being a potential political threat to the government in starting what could have become a sort of internal revolution, and that is why he was removed? Likewise, what were these “rules” he was enforcing, and are there more that have yet to be reported?

We do not know, but this would not be uncommon, as it has been done in the past such as with Jan Hus and John Wyckliffe, who far from just “being Christians”, were actively fomenting revolutions.

Third, is that the monastery has pictures of the last Russian Czar as well as the mass-murdering atheist Iosep Jughashvili, known as Jozef Stalin, in it. I have consistently noted not only the subjugation of the ROC to the KGB, but how it is an open scandal, acknowledged by many Russian Orthodox faithful, that Stalin is consistently commemorated, including plans that came out but were later scrapped to put Stalin’s mural in a major and newly opened Russian Orthodox Cathedral. I have noted, on the authority of many people, that Putin has a reverence for Stalin and he is attempting to revive the USSR an envisions himself as a new Stalin in his own conception of making Russia a ‘powerful’ nation again.

Stalin was an atheist and mass murderer. Putting his photo up in any monastery is as repugnant as it would be to elevate Hitler, Mussolini, or Putarco Elias Calles in a monastery, since they hated religion, Christianity, and God. He has no place in the Russian Orthodox Church- that is, unless one believes that Russian Orthodoxy and ‘patriotism’ are inseparable, and the former serves as one arm to support the latter, even if it s not officially declared.

One does not know exactly what was happening at this monastery. However, just as the COVID-19 coronavirus has been used as an excuse by governments to do many things, it appears this may be the case again, but this time instead being used to cover for what may be something more subversive coming from a monk just as what has happened before in the past.