You are here: Home › Chinese Government Forces Uyghurs To Be Sterilized In Demographic Genocide 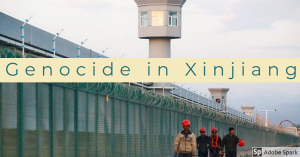 Contraception is a form of ‘demographic genocide’ as many have argued, since its philosophy and method reduces man to the level of an animal and treat him as a commodity that can be farmed and killed as one pleases. While people in the western world have argued about this in the name of “muh rights”, the Chinese government know this and have proceeded with such philosophy in an according manner, especially against the Muslim Uyghurs, where the Catholic News Agency reports that Uyghurs are being forcibly sterilized in an attempt to commit demographic genocide against them.

The Chinese government is forcing Uyghur women to take contraceptives in an effort to slow the growing population. One expert called the campaign “a slow, painful, creeping genocide” of the religious and ethnic minority.

In a report released on Monday, June 29, AP found numerous Uyghurs have been imprisoned for the offense of having too many children, and women reported that there were frequent pregnancy checks, forced abortions, and forced implantations of IUDs and other contraceptive methods by Communist authorities. The report cites government statistics, state documents, interviews with ex-detainees, family members and a former detention camp instructor.

The report follows previous findings of mass internment, forced labor, sterilizations, and other wide-spread human rights abuses by the Chinese government against the ethnic and religious minority.

Uyghurs are a mostly Muslim ethnic minority in China living in the northwestern province of Xinjiang.

e news comes as anywhere from 900,000 to 1.8 million Uyghurs are now estimated to be in the system of more than 1,300 detention camps set up by Chinese authorities, ostensibly for “re-education” purposes. Survivors have reported indoctrination, beatings, forced labor, and torture in the camps. China initially denied the camps existed, but was forced to officially admit their existence in 2018.

One expert told the Associated Press that the forced birth control campaign is “genocide, full stop.”

Finley described the program as “direct means of genetically reducing the Uyghur population.”

Conversely, the rate of IUD insertion in Xinjiang has increased by similar percentages. In 2014, there were 200,000 IUDs inserted in the province, a number which grew to 330,000 by 2018. AP reported that this uptick in IUDs was counter to the rest of China, which had seen the contraceptive device fall out of favor among Chinese women.

The report also found that 149 of 484 detained persons in the Xinjiang county of Karakax were detained for having more than the officially permitted amount of children. This, said the AP, was the most commonly cited offense justifying detention. (source)

Islam may be evil, but one cannot support genocide, as that is also wrong.

Likewise, given the problems which China is facing, there is a strong chance that her attempts to annihilate the Uyghurs will only result, when war comes to China, in their absolute rebellion and siding with whoever is China’s enemy, as many will be happy to dole out vengeance in response for the crimes taking place against them today.

Germany Disbands Elite Military Unit Over ‘Far Right Extremism’
Russian Orthodox Monk Defrocked For Denying COVID-19, But Is That All There Is?
Follow