You are here: Home › Tens Of Thousands Of People Face Homelessness As Moratorium On Evictions Prepares To Expire 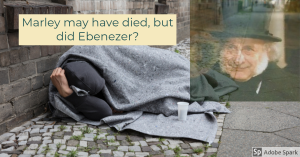 In the famous Charles Dickens novel A Christmas Carol, the banker Ebenezer Scrooge was famously quoted when asked to give to a charity for the poor and destitute, he said “I don’t make merry myself at Christmas and I can’t afford to make idle people merry. I help to support the [prisons and union workhouses], I have mentioned—they cost enough; and those who are badly off must go there.” When the charity collector said to Scrooge that “Many can’t go there; and many would rather die.”, Ebenezer responded “If they would rather die,” said Scrooge, “they had better do it, and decrease the surplus population.”

Unfortunately, while Ebenezer was converted from the errors of his ways, many are not and the coronavirus situation is exposing this as landlords across the country are preparing and ten of thousands of people face evictions following job loss and the inability to get a job because of the losses caused by the infection.

Eviction moratoriums nationwide are set to expire later this month, potentially thrusting tens of thousands of people into a housing crisis.

Congress in March passed a federal mandate prohibiting evictions or foreclosures until July 24 in response to the coronavirus pandemic. But as the deadline quickly approaches, experts warn that unless Congress passes more relief, renters might be forced out on the streets.

Across the country, thousands of evictions are either pending or processing, possibly setting up a wave of newly homeless people in the next few months. The pandemic has pushed millions of Americans into unemployment, leaving many unable to keep up with monthly rent and food demands.

In Tucson, Arizona, the courts are processing an average of 52 eviction cases per day, up from the normal 10 to 30 cases, according to the Arizona Daily Star. In Tennessee, more than 9,000 eviction hearings are pending, about 33% more cases than normal for this time of year, the Memphis Commercial Appeal reported.

Homeless and housing services experts in New York are seeing signs that there will be a spike in the population of newly homeless people in the coming months.

No concrete data yet exists that quantifies the number of newly homeless people nationally. But in New York, “we still anecdotally have seen some people become newly homeless due to informal evictions, particularly for people who did not have a formal lease in their name,” said Jacquelyn Simone, policy analyst at the Coalition for the Homeless.

Large numbers of these people “were paying week by week for room rentals and lost their source of income due to the pandemic. Many of those people have become newly homeless, because they might not have realized what their protections were.”

The CARES Act, which became law in late March, put a temporary pause on evictions and foreclosures as millions of Americans grapple with the economic turmoil brought on by the pandemic. That relief extends only to federally assisted properties.

From state to state, moratorium degrees vary widely. Some states, such as Connecticut, Washington, and New York, have put in place their own temporary bans on evictions that last into August, according to data compiled by the Eviction Lab, an organization based in Princeton University that’s dedicated to tracking eviction rates.

‘A tsunami of evictions’
Across the country, homeless service experts are watching for signs that the number of newly homeless will spike once their state’s eviction moratorium ends.

In New York, the number of single adult men checking themselves into homeless shelters has gone up on four nights in June, a period of time when “we would not be hitting new records” normally, Simone of the Coalition for the Homeless said. During other years, the single adult count in homeless shelters normally declined during this time.

“Instead, we’re hitting new records for the single adults in shelters, and that’s just the shelters run by the Department of Homeless Services,” Simone added. “So I think it’s unusual to be seeing these trends and I am anticipating that we are going to continue seeing these trends as protections for people facing eviction expire.” (source)

Now it should be noted that landlords do have rights and responsibilities to their renters. They need to make a profit, and they also need to expect payment because bills do not pay themselves. While it can be difficult, there is a relationship between renter and landlord that needs to be mutually beneficial, and both need to care for each other. Opportunism from either side, especially through using laws as a weapon instead of as a guide, is never a good path and always results in problems no matter who does it.

The situation now is such that a lot of people are losing money, landlord and renter, and the problems directly overlap. Many landlords, especially smaller ones, could be pushed into bankruptcy, and many renters could be pushed into homelessness. The problems that caused this situation have been known about for years, but because of greed and a lack of general care for the good will of others, the situation as it exists today has come to pass.

A lot of people- good people of modest means, who work hard, and are well-intentioned -may find themselves homeless and with no place to go or work to be had to make their situation better.

This is not the time to do what Ebenezer did and take a hard approach, or to be abusive to them, or to encourage eugenic ideas. Rather, this is the time for compassion, understanding, patience, and moral fortitude as well as, in as much as one is able, to help those who need it because there will be so much need.

At the same time, one would be wise to prepare for the coming problems that if one has a job, to work as much as possible, save up as much money or spend what money one gets on paying bills, and preparing for the future financial storm that is upon us.