You are here: Home › Five Policemen Arrested In Connection With Murdering Two Christian Men In India 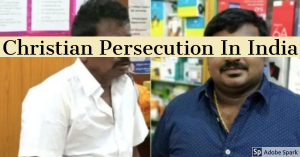 The persecution and murder of Christians in India has been a growing problem for years. India has grown to become one of the top ten nations most dangerous for Christians, and with the rise of Hindu nationalism, those numbers are expected to worsen as parties such as the BJP and affiliate political movements such as Vishwa Hindu Parishad (VHP), Rashtriya Swayamsevak Sangh (RSS), and Bajrang Dal (BD) continue to attack Christians and encourage violence. Policing does not necessarily help either because many times, the police actively are members of or encourage these groups to attack and will support, ignore, or actively participate in the violence.

According to a story out of southern India in the state of Tamil Nadu and as reported by the Christian Post, a Christian father and son were found murdered and five police officers have been arrested in connection with their deaths.

Five police officers in India have been arrested in connection with the killing of a father and son who were allegedly brutalized after their arrest last month for keeping their store open past permitted hours during the ongoing coronavirus pandemic.

The father and son were jailed at the Sathankulam police station in Tuticorin and family members say their loved ones were tortured.

The death of the Jeyarj and his son has fueled protests and demonstrations against police brutality in India, which have occurred since the death of African American George Floyd in Minneapolis on Memorial Day.

An investigation was launched by a local court. The Madras High Court, the highest court in the state, ruled there was enough evidence to charge the officers with murder.

The court found there were serious injuries listed in the two men’s autopsy reports.

Pimp Logic: How People Justify Evil By Pointing To Their Good Deeds
Why Would Anybody Buy Old Food When They Can Buy New Food?
Follow