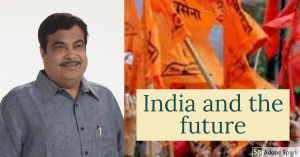 Nitin Gakdari is the Indian equivalent of the Minister or Transportation for his country. He has been written about briefly on Shoebat.com as it concerns a statement made in 2017 when he verbally attacked Indian Christians for being ‘obstructions’, ‘anti-Indian’, a ‘microscopic minority’ and an ‘obstruction to progress.’ He is also a member of the BJP and is an avid Hindu nationalist, which Shoebat.com has reported about being a major trend to watch since as Hindu nationalism rises, it poses and direct and major existential threat to Christians in that out of nationalist rage, Christians my be exterminated in mass death camps similar to and even drawing inspiration from the many genocides of the twentieth century.

Recently, India and China have been in a series of struggles in the Himalayas for dominance, and this has caused a serious rift between both nations. The Times of India reports that Gakdari responded to the recent events by saying that as a result of Chinese aggression, India will no longer give road building contracts to Chinese firms.

No Chinese company will be allowed to participate in any future highway project and companies entering into joint venture (JV) with any firm from China will also be banned from bidding for projects, road transport and MSME minister Nitin Gadkari said on Wednesday.

Talking to TOI, the minister said he has approved the policy and also asked highway secretary Girdhar Aramane to revise the bidding norms for projects to enable more Indian companies to participate in the tender process.

“Our focus is to encourage Indian companies to take up more work. However, foreign companies can also participate for technology and consultancy-related works. But there also, we won’t entertain any Chinese player directly or indirectly,” Gadkari said.

The minister, who had first talked about growing discontent among global investors against China due to the coronavirus pandemic, said his ministry is not touching already awarded projects and other works to avoid “litigations”. “If we revisit old contracts, there will be litigation. So, the decision will be applicable for all future tenders. I have instructed officials to take necessary steps,” he said.

Sources said the tender norms have to be tweaked to bar any Chinese player or investment. It’s not yet clear whether any of the active tenders will also be scrapped where Chinese companies are bidding in any form.

Meanwhile, NHAI has put the bid of a Chinese firm on hold in one of the stretches of Delhi-Mumbai corridor. Sources said there is every probability of the bid by the Chinese company being nixed. “Since the work has not been awarded. It won’t be a problem,” said a source. (source)

It will be interesting to see what firms India will employ, or what the effects will be on the political situation in the region. The same must be said about how this action, in combination with the changing face of Indian politics, will feed the rise of Hindu nationalism.

Likewise, this is an important time to remind all Christians, as I have consistently said, if they are able to emigrate from India to another nation, please take advantage of that opportunity. While it will be some years before a war, it is getting much closer, and one does not want to get caught in India as a Christian amid nationalist armies who seek to horribly abuse and murder Christians in the name of a game of power. Please use the opportunity while it is still available to find a way out, because it is likely there will come a time when it is no longer possible to do so.