You are here: Home › US Economy Goes Down As The “Reopenings” Turn Into “Reclosures” 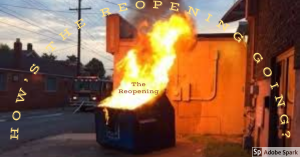 A lot of politicians were touting the concept of a “reopening” in the hope that the COVID-19 coronavirus pandemic had passed, but since this was not true, the “reopenings” turned to “reclosures” and as Zero Hedge has noted, it is also causing major economic problems.

Unacast data shows as confirmed virus cases rise and reopenings are paused or reversed – the mobility of Americans is starting to stall.

Goldman Sach’s latest state-level coronavirus tracker calculates that 40% of the U.S. has now reversed or placed reopening on hold following the rise of cases.

Consumer traffic data at brick and mortar stores compiled by Reuters from cellphone data provided by Safegraph dropped this past week for the first time since early April.

Oxford Economics analyst Gregory Daco wrote, “more than ever, we’re concerned about the worsening health situation and its impact on the burgeoning recovery. Rebounding mobility and poor use of protective equipment will make for a dangerous summer cocktail.”

Yelp made a shocking claim last week that said: 41% of all business closures on its platform are permanent closures.

As the mobility trends stall, recovery set to reverse, and businesses go bust – it’s only a matter of time before the economic realities set in that probabilities of a V-shaped recovery in the back half of the year are quickly fading.

The recent upswing in economic data is likely nearing a peak – not the best news for future stock market gains.

If the economic recovery is set to reverse – would it be considered a dead cat bounce? (source)

The famous British band Queen sand their 1980 hit “Another One Bites The Dust” about a man hunting another man and murdering him. While one does not want to promote murder, let alone comment on the very questionable lifestyles and behaviors of many members of the band, the title “another one bites the dust” is more than appropriate here, for instead of people, one is seeing the death of many businesses and individual lifestyles through the systematic unemployment being created by the crisis.

There never was a recovery. There is not going to be a recovery. It simply isn’t going to happen because the issues of why the economy is in the state it is remains due to debt, and as long as there is a debt issue, the underlying problems cannot be remedied and any means taken will be but a delay of the inevitable reckoning due to the system as a result of the debt.

As it is noted, the situation here exactly appears to be the “dead cat bounce” scenario discussed here at Shoebat.com before, which states that just as even a dead cat thrown hard enough against a surface will bounce before it stops, an economy in terminal decline will have several small “ups” that can be charted before it stops or dies.

The decline of the US economy in modern times is a major event whose importance cannot be understated because just as economics precedes politics, trade problems lead to political problems, and trade and economic wars always lead to “hot” wars with soldiers and guns marching on other nations. Since the US economy is both the dominant economy as well as due to the status of the dollar as a world reserve currency a “lynchpin” that holds many nations, economically and politically speaking, in a sort of unity or balanced arrangement, the removal of that pin will cause fragmentation and inevitably conflict between them. This does not even include the fact that many Americans will see their individual livelihoods ruined as they lose work and are unable to recover either the income earned or the ability to maintain their current lifestyles, and are forced to downsize amid the same situation that also is befalling their family, friends, neighbors, and communities.

So as “another one bites the dust”, with the so-called economic “recover” and the touted “reopening” now transforming into more closures and reduced commerce, the business doors will continue to shut, the shelf stores will get thinner than they already are in spite of the best attempts to hide the lack of products coming in on trucks, and the general desperation in society will increase until, at some point, it will be forced into the open for all to see.

Instead of the case being “the emperor has no clothes”, this is a case of “the economy has no clothes”, for the realities of debt, consumption, and decline are catching up with the society and there is little room left to “kick the can down the road” before the fiscal cliff drops into an abyss, and with it the rest of the world.

Black Paramilitaries Are Enticing Right-Wing Militias, Trying To Start A Race War
More Jobs Say ‘Sayonara’ As Japan Chooses To Use Robots, Triple Pay Rates For Mexican Workers Than Build Cars In The US
Follow