You are here: Home › More Jobs Say ‘Sayonara’ As Japan Chooses To Use Robots, Triple Pay Rates For Mexican Workers Than Build Cars In The US 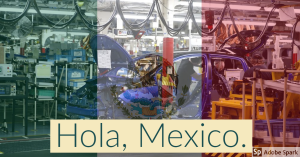 “Free trade” has given the American public many benefits, such as cheap goods, but it has come at the serious cost of American jobs amid increasing standards of living demanded and yet declining pay, thus resulting it the evisceration of communities, the proliferation of economic-based crime or other socially deviant behaviors, and the long-term stagnation of the economy. No president in spite of his talk about “jobs” has done anything fundamentally to resolve this problem and there is no answer in sight, and certainly not with the current (or even likely a future) president. The situation is so bad that as the Nikkei Asian Review points out, Japanese companies would prefer to build cars in Mexico while tripling their pay rates instead of build cars in the US.

he new North American free trade agreement that goes into effect Wednesday was touted by U.S. President Donald Trump as an engine of American job creation. But Japan’s automakers are largely opting instead to keep operations in place and pay Mexican workers more or even just pay tariffs.

The US-Mexico-Canada Agreement requires 40% or more of parts for each passenger vehicle be manufactured by workers who are paid at least $16 per hour as a condition to make them tariff free in the region. Trump hailed that feature as a way to boost production in the U.S., which has a higher hourly rate than Mexico.

However, this looks to be wishful thinking. The ratio of US-Canada parts among Mexican-assembled vehicles sold in the U.S. was 13.5% in 2018, according to the U.S. Department of Transportation Highway Traffic Safety Administration. Trump’s theory was that U.S. production would inevitably increase to meet the 40% requirement, but Japanese automakers, which had already positioned their production bases according to the old NAFTA regime, are not simply willing to pull up stakes and redeploy.

One reason is the cost of moving production. Honda Motor-affiliated parts maker Keihin will raise the hourly wage of employees at a factory in Mexico to $16 by next month — triple the average rate of a parts factory in Mexico, but still cheaper than making a move. Because the pandemic has hurt earnings, the cost of the moving production will likely be too burdensome over the foreseeable future.

Auto component maker Piolax, will also raise the hourly wage at its Mexican plant to $16 within the year. The company is also installing robots to mitigate rising labor costs, President Yukihiko Shimazu said.

Toyota Motor, which built a new plant in Mexico in 2015, is not finding it easy to change plans either. The new plant started full-scale production of pickup trucks in February. The trucks are popular in the U.S. and would be subject to a 25% tariff if they do not meet the content requirements of the USMCA. But if Toyota does not operate the factory, it cannot recover its investment.

“We don’t want to be whipped around by a policy that we don’t know how long it will last,” said an executive at a Japanese automaker. (source)

The US is in a very bad economic situation, and it is not going to get better. The issues are deep any many, and there is no one “answer”, but the simple explanation is that in the US, certain job sectors are overregulated and in need of deregulation, and others are in need of regulation as there is none. The result of this imbalance is a constant chaos that has inhibited real cooperation and economic growth from happening, with most “growth” as a result of lowered costs due to sending jobs to foreign lands and stockholders or CEOs pocketing the difference while continuing to demand more from their domestic employees for continually lower pay and threatening them when they say they do not like being treated similar to a slave in a suit, for not all slaves have chains, and not all switches used on slaves are whips.

During the Second World War, there was a great economic recovery because of domestic factories, but as domestic production sees no sign of coming back but rather a continual outsourcing even as the conditions for war continue to develop, it is likely that not only will poverty increase, but in the event of a major conflict, it will persist and possibly worsen.

If one has a job, it is a time to be very grateful, and to work as hard as possible while one can still earn the money in preparation for the future, which always comes upon one very fast, and at that point it is too late to do anything else to help oneself.